We visited Wheeler again January 7. Real winter had reached into the deep south, holding grip long enough to freeze Big Blue Lake. I think had I been a bit more adventuresome, the ice may have supported my weight: 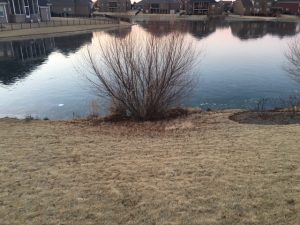 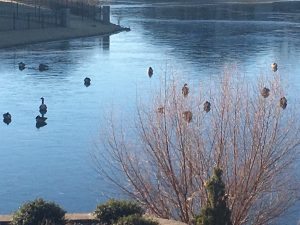 I have written and reflected often of nearby (20-25 miles WSW of where I live) Joe Wheeler National Wildlife Refuge. More than one reader has inquired, “Where is Wheeler?” I can show better than explain: https://www.fws.gov/uploadedFiles/Region_4/NWRS/Zone_3/Wheeler_Complex/Wheeler/Wheeler%20Brochure%20(wlrgen.).pdf .

I had anticipated finding slack water at Wheeler frozen, and wondered whether the adjoining fields would harbor peak-level sand hill cranes just the same. Sure enough, open water proved to be fully ice-covered. Nary a duck, contrasted to many thousands just two weeks prior. Where were they? We observed a few flights of hundreds nearer the distant tree line, perhaps a larger channel of the Tennessee River offered open water beyond the trees. The cranes did not disappoint. Refuge personnel as we entered the visitor’s center reported 30,000 cranes on the property at that very moment. Due north of the two-story observation building, sand hills clogged the field (right). Same to the northwest, as one lone adventurer crossed the ice stilt-legged and quite carefully (left). 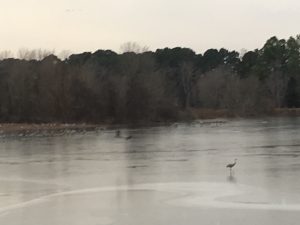 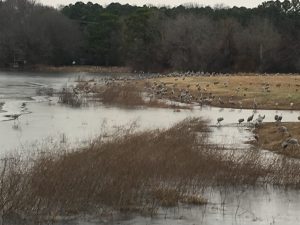 As I’ve mentioned previously in these posts, Nature plays within the limits of normal. Although the recent cold has extended more deeply and longer than average, it nevertheless is within the bounds of normal. The following day, warm air surged northward bringing 0.90 inches of rain and temperatures approaching 55 degrees. I write these words Sunday, January 14, when we’re back in the upper twenties for highs two days running.  Friday we reached 70. Winter does not hold firm here. Instead, it now and again crests south of us, then quickly retreats with southern breezes. Tomorrow will surpass 45; Tuesday we expect 1-2 inches of snow. The cranes have faith (and millennia of experience) comforting them that this is a good place to overwinter, despite the few winter advances.

From the observation deck, we could see four whooping cranes, less than clearly distinct in the distant center below. What a story of success in saving ourselves from ushering yet another magnificent avian friend to extinction. I think of the Carolina parakeet, the passenger pigeon, and the Ivory-billed woodpecker… and weep. Thank God we can still see whoopers in the wild! 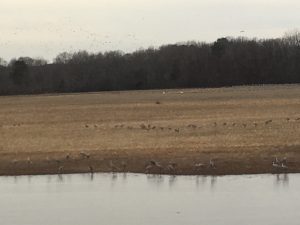 We also saw a few dozen snow geese near the observation building. Yet the sand hills stood and moved about in overwhelming masses. Their croaking dominated the airwaves — conversations, chatter, and arguments here and there. Even in flight, they announce their comings and goings — a music that both excites and soothes. 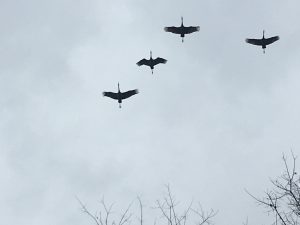 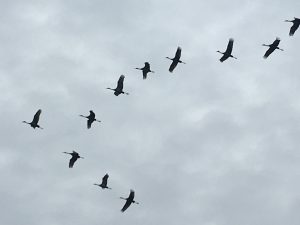 I think of the 1996 movie Fly Away Home, when the young girl leads the orphaned Canada geese south in her ultra-light aircraft. Cinematography places the viewer with the geese during their sojourn. Ah, what must it be like to migrate with the sand hills! Or at least fly over Wheeler for a couple hours with them. I know that I will not. Yet my soul accompanies them. I stand, as I did taking the two in-flight photos above, and cast my gaze with them, pivoting as they swing past effortlessly, chattering all the way. Theirs is a voice of promise, hope, joy, and aspiration. As so often is the case with Nature, I feel deep humility… and unfathomable inspiration. We have watched other thousands of sand hills, from western USA flocks, as they stopped off twice annually at Creamer’s Field near Fairbanks, AK, at 64.8 degrees north, just a few hundred miles from their Arctic breeding grounds. I felt the same magic and wonder.

Wheeler is special for all manner of its 35,000 acres (>50 square miles). I never tire, winter or summer, of the cypress swamp near the visitor’s center. January 6 gave me a view I had not previously enjoyed — ice and cypress knees: 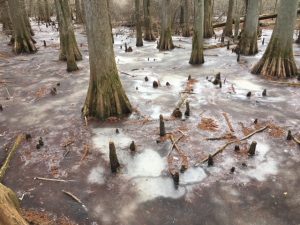 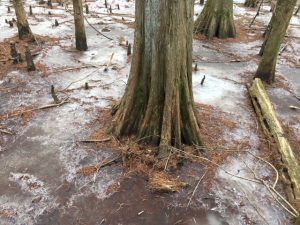 The buttressed, fluted lower trunk projects a stronger-seeming image in ice and cold: 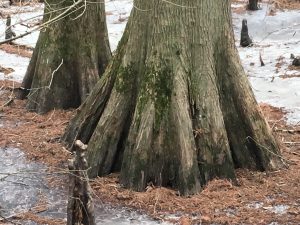 Where is the greater beauty — the cypress or the sand hill crane? May I inquire of you, which among your children is your favorite? The package of beauty, magic, wonder, and awe appears where we seek it. I am blessed with seeing it most everywhere I look.

I believe in my heart of hearts that every lesson for living, learning, serving, and leading is written indelibly in or is powerfully inspired by Nature. Because I believe, my awareness of the lessons and my search for them will find reward. What do you see in and sense from this field of magic below? I hear echoes from eons; I see hope for the future; I feel Nature’s seasons throbbing; I inhale the sweet fragrance of promise and inspiration. I believe these are symbols of an Earth-of-Life, spurring and challenging us to steward our isolated home, alone and fragile in the vast darkness of space. I see obligation — environmental, social, moral, and spiritual. I see a higher power; I pray for a higher power. 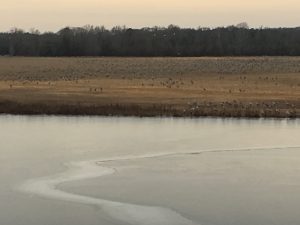 The NATURE of Presidential Leadership and Crisis Management within Institutions...
Scroll to top