I’m a spatial (not at all special) guy. Over my field forester days and subsequent positions, I’ve enjoyed many hours airborne, face pressed to the windows. Whether on commercial airline ascent or descent (not much to see from 30,000-foot cruising altitudes), or evaluating land exchanges via chopper, I interpret the landscape much more clearly than from ground level. While on a site/stand-scale nothing beats boots on the ground, the 1,000 to 1,500-foot vantage point opens the land (and my eyes) to an ecosystem scale.

I had been wanting to view FSU and our community by air since accepting this interim appointment. December 15, the agents of aircraft, pilot, earth, and sky aligned… just a week from my final day on campus. Joel Kirk, one of our FSU pilot flight instructors (and retired Marine flight instructor), took me up late morning. We didn’t have a lot of room to maneuver under a scuzzy 1,500-foot ceiling. I did not complain! Finally, I could see the world unfold beyond the Interstate, which in this view lies a mile or so to the left. 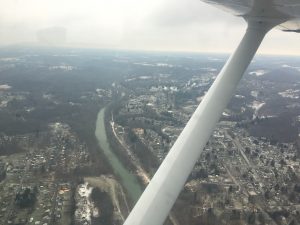 Imagine the river as a route of exploration and commerce, predating European settlement by millennia. Its valley as a path of least resistance for roadways and rail-beds. Water and gravity over the long course of time shaped the local topography. These hills are water-carved from nearly pancake geology. Road cuts reveal flat strata, one layer neatly lying above the next. Coal mines beneath these hills follow rich seams horizontally. Yet another of Nature’s revelations, the coal and natural gas tell the story of layering of a different sort. Deep (and deeper-still) time transformed Pennsylvanian/Permian forests/swamps/bogs to these fossil fuels that power our industrial society. Amazing what a mere 250-300 million years can accomplish! That’s some 110 billion sunrises. Here in north-central WV, many people have died harvesting that ancient plant-stored sunshine.

The River has for eons transported eroded sediment from the west side of the Appalachians, first northward, delivering it to the Ohio, then southwestward into the Mississippi, and then to the Gulf of Mexico. For all but the past 15+ thousand years, the rivers had no names, yet their power, majesty, and beauty predated homo sapiens’ labeling them. The Monongahela carried its load easily long before Asians crossed the Bering Land Bridge and made their way east and south across the Rockies, Great Plains, and Lake country to these West Virginia hills. The Mississippi Delta bears witness. Deposits reach depths of 100,000 feet, over three times the height of Everest, deep enough to subside Earth’s crust, taking New Orleans each year a little further below sea level. The Big Easy owes a bit of its flood prone situation to West Virginia sand and silt! Time and Nature could not possibly care less about a city sinking into the sea. We humans place our fair cities in harm’s way and then spend billions in a feeble attempt to protect them. Katrina cared little about over-topping a few levees.

Likewise, deluges in early April 1852 paid little attention to Fairmont occupying the river’s flood plain. From Wikipedia: “Heavy rains the day before caused the Mon and West Fork Rivers to rise at a rate of 5 feet per hour until Tuesday afternoon, when the water reached 43 feet above its normal level. The greatest damage was sustained on the West Fork, where over 40 houses and buildings were swept away and floated past Fairmont.” What difference does flushing a few houses down to Pittsburgh make to a river intent on carving the Appalachian Plateau? 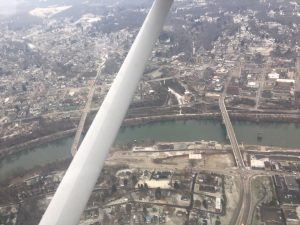 A New View of Campus 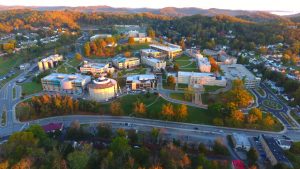 A much appreciated perspective, teasing my desire for a first-hand aerial view. A few weeks later, beyond late fall residual color to an early winter, snow-dusted view from nearly 1,000 feet higher, I scratched that itch:

Shaw House, my six-month President’s residence, sits within the rough semi-circle of pine and hemlock (see the evergreens above) mid-campus, oriented at nearly 180 degrees in the summer drone photo below: 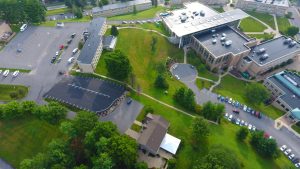 A lovely 125-acre campus developing, educating, and inspiring some 4,000 future citizens and leaders who will lead us into the future. Appropriately, from this perspective, the university sits within a larger landscape… a setting stretching into the distance, both physically and metaphorically. I like to think that during my tenure as an FSU Falcon, I have encouraged and enabled our faculty, staff, alumni, students, and our broader community to lift and extend our vision. Our reach is without limit. My aerial exploration revealed that with a bit of lift, we can see what is normally invisible. FSU’s family, with my continuous prodding, is now seeing the invisible. And seeing the invisible, we are now reaching for what had been impossible. In fact, an institution that had slid into satisfaction with an Earth-bound trajectory, we are collectively soaring… as all good Falcons should! I am glad that my actual flight came near the end of this six-month journey. I think you may be able to read the look of joy and fulfillment I feel completing my Falcon flight, both actual and symbolic (that’s Joel beside me): 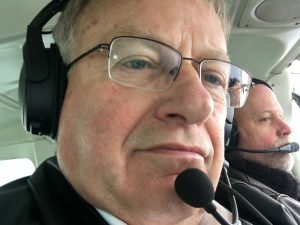 My Dad loved Nature and airplanes. All that I have tended and nurtured in my life sprouted from seeds he planted in my heart, soul, and psyche. I read John Gillespie Magee Jr’s High Flight at Dad’s memorial service nearly a quarter century ago:

High Flight
Oh, I have slipped the surly bonds of earth
And danced the skies on laughter-silvered wings;
Sunward I’ve climbed, and joined the tumbling mirth
Of sun-split clouds … and done a hundred things
You have not dreamed of … wheeled and soared and swung
High in the sunlit silence. Hov’ring there,
I’ve chased the shouting wind along, and flung
My eager craft through footless halls of air.
Up, up the long, delirious, burning blue
I’ve topped the windswept heights with easy grace
Where never lark, or even eagle flew.
And, while with silent, lifting mind I’ve trod
The high untrespassed sanctity of space
Put out my hand, and touched the face of God.

I feel the same tumbling mirth from my six-month FSU flight. I have, in fact, trod with silent, lifting mind. Magee paints my soaring heart so beautifully. A bit corny perhaps, yet I do feel that via this gift of an Interim Presidency, I have put out my hand, and touched the face of God.

The Cycle Completes a Turn

Preservation and Change
Scroll to top