My first two undergraduate forestry summers I performed continuous forest inventory on Savage River State Forest (then 52,000 acres) in Western Maryland’s Garrett County. I stayed weeknights in a cabin at New Germany State Park. The entire experience served in retrospect as a gift from God — Divine Professional Providence! Preston County WV lay just to Garrett’s west, still in the Allegany Plateau high country from 2,500 to >3,500 feet. Just over the WV line, WV’s Cathedral State Park preserved and protected an ancient hemlock stand that had escaped turn-of-the-20th-Century logging. I visited and hiked the preserve a dozen times over those invigorating formative summers. 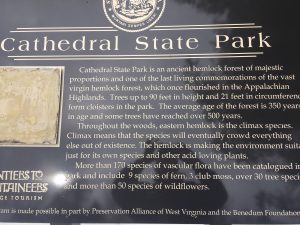 I recall a closed canopy of massive trees, a mixed stand of hemlock, black cherry, oak, and others. An understory dark with deep shade. Vibrant and healthy trees showing vitality despite standing for perhaps 300 years. I’ve carried the indelible memory with me for the 45 years since. 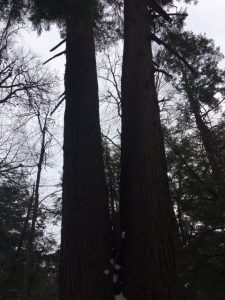 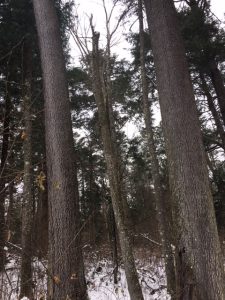 December 17, 2017, a week from my final day at Fairmont State University, I re-visited Cathedral State Park. The four-plus decades have not been kind, and I don’t mean just to my knees. The once regal, magnificent old-growth forest is entering its period of senescence.

Age and gravity always prevail. We can cherish these ancient stands, yet we cannot forever delay the ultimate ravages of time. The agents of agony and demise range from individual lightning strikes to uprooting to mid-trunk shattering to thinning and fading foliage. 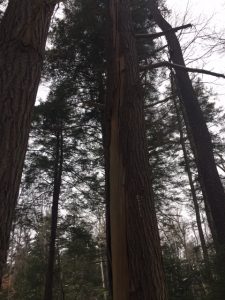 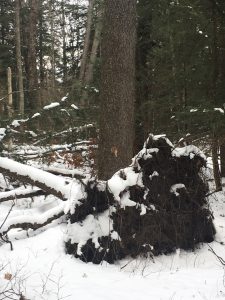 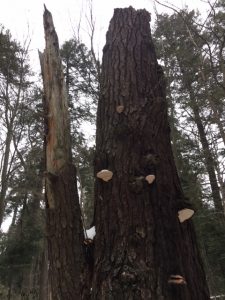 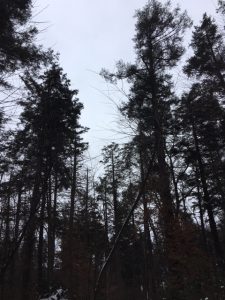 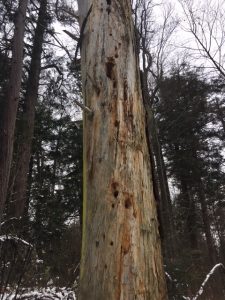 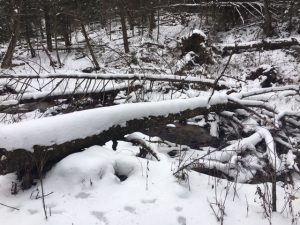 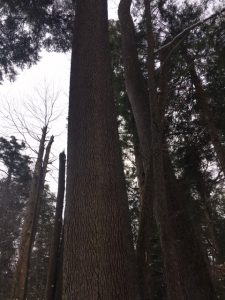 I’m told that Super Storm Sandy dumped a couple feet of wind-driven wet snow at this elevation, doing great harm, snapping many stems and wreaking havoc within the crowns. Sandy served as the proximate cause – the catastrophic straw-breaking-the-camel’s-back. Yet the ultimate agent acted over an extended period of change. Nature knows time… and anticipates inexorable stresses, shifts, patterns, and eventual mortality. Light now reaching the forest floor is triggering forest renewal at Cathedral. When the last of the giants submits to the forces of Nature, the next stand will be adolescent, a rich admixture of hemlock and hardwoods. 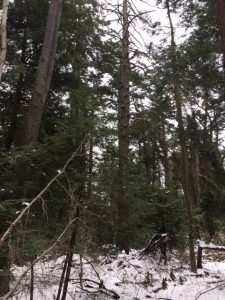 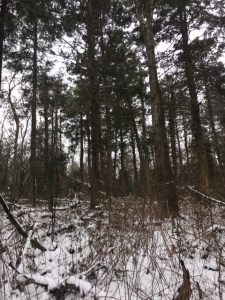 Nature knows how to perpetuate forest cover, albeit the next iteration may (No, will!) differ in species composition, structure, and old growth trajectory. Three hundred fifty years hence, the new forest may look little like today’s aging stand. Nature’s top seldom re-spins in like manner. Perturbations will not pattern-repeat over neat 350-year cycles. What if the next super storm strikes the new stand at age 50? Followed two springs hence when a wild, dry, spring front pushes winds reaching 50 miles per hour… and some camper fails to tend a cook-fire? The crazy fury will convert the fallen, tinder-like debris of the downed forest to ash and bare ground. What then? Forget about hemlock. Look instead for oak root-sprouts and light-seeded, wind-dispersed species like aspen, and seedlings from acorn-snacks cached by rodents or birds in soil. Nature’s team is proven and reliable. The busy squirrel buries the acorn for retrieval, unaware that she will not (cannot) find them all, and that one of them may be part of Nature’s design to perpetuate the oak. And she knows not that her habit of caching tasty acorns furthers her own species, assuring that future oaks will feed her descendants time and again.

Every Forest Tells a Tale

Her act of placing the acorn is random. Chaos rules Nature… I suppose chaos rules most everything. Nature’s preparation is hard-wired, DNA-ingrained-preparation spanning a few million years of adaptation. Our enterprises and lives are far less experienced. Nature urges anticipation; we too often operate without it. We also are blind to what is likely, much less to what is possible. Nature will occupy this land, originally protected and preserved for the sake of a wondrously beautiful old-growth hemlock forest. Visitors many generations hence may see rotting hulks of long-dead forest giants. Interpretive signage may tell the tale. Old photographs may chronicle the story of the magical forest. Several individuals may persevere another hundred years.

Many of you own forest land. I recall from my faculty days at Penn State that one in ten Pennsylvania families owns forested property. Your forest acreage, whether in New Hampshire, Alabama, or Kansas, has its own story, written on the land and still retained within the family’s written and oral history. Contact me if you’d like to have your own Forest Land Legacy Story told and interpreted for prosperity (http://stevejonesgbh.com/legacy-stories/). Every stand expresses sentiment and symbolizes special meaning and memory.

For example, at Cathedral, I found and photographed one giant that spoke to me of life and living. It reached for the light with a rough ladder… a Stairway to Heaven. A symbol for both our need to reach beyond our own grasp, and to reach for something larger than our meager selves: 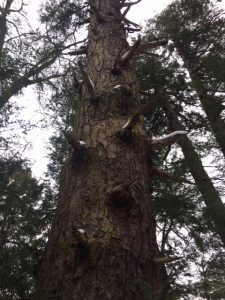 As I’ve observed time and again, every lesson for living, learning, serving, and leading is either written indelibly in or is powerfully inspired by Nature.

Revisiting Cathedral State Park still generates a deep sense of humility and full inspiration. Although fading, the forest still touches my core. I absorbed those few hours via my five portals — heart, mind, body, soul, and spirit. Even a snow-covered foot-bridge over a late fall flowing stream evokes wonder, awe, and appreciation: 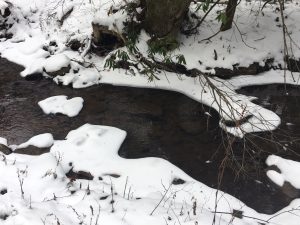 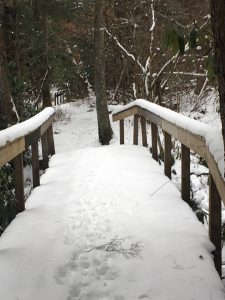 I also felt a sharp melancholy. A realization that nothing stays the same. That time marches onward, and we are taken along for a ride, powered by forces beyond our control. We can only do what we can within its current, making some small differences as we may. Making the most of the voyage, and always conscious of our responsibility to steward the land and leave it better for those who follow.

Returning from a Six-Month Absence
Scroll to top