Wheeler National Wildlife Refuge occupies 35,000-acres along the Tennessee River, its nearest access point just seven miles from my home in Madison, AL; the visitors center is twice that far from me. We and our two Alabama grandsons went to the further point November 25. Forget, for the purpose of this GBH Blog Post, about the thousands of sandhill cranes that greeted us (I’ll issue that Blog Post later) — instead, we discovered magic among the trees at Wheeler during this period of fall-to-winter transition. The cypress (Taxodium distichum) swamp adjacent to the visitors center never fails to inspire me. The boardwalk trail is no longer in deep summer shade. Sun dapples the ferny, coppery-bronze cypress leaves carpeting the walkway! Four-and-a-half-year-old Sam enjoyed scuffling his feet to plow mounds of the feathery leaves. 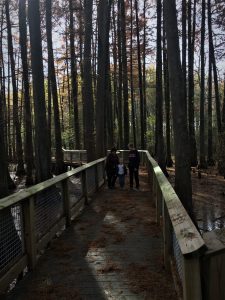 The canopies still held perhaps a third of their leaves… enough to demonstrate a common misconception about forest trees. Lying on my back, I snapped the vertical shot below. Most people imagine that forest trees interlace their branches to form a solid shield of canopy above, one tree interlocking with another. Such is not the case. These cypress canopies may touch when wind blows them back and forth. Certainly, a squirrel would have an open highway leaping from one to another. Yet, in this stand with no understory nor intermediate canopy, the trees occupy unique aerial columns. Reminds me how in this modern world of living close to one another in crowded cities, most of us still manage to stand isolated. In proximity, yet not touching. Even still, like the cypress, we draw some level of support from living in communities. Shallow-rooted, any of these cypress if standing alone, would topple in a strong wind. Unlike Henry David Thoreau on Walden Pond, most of us, too, living alone would soon topple. 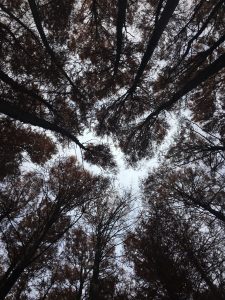 This hackberry (Celtis occidentalis) and the same-species smaller tree beside it find themselves in some form of mutual agitation. With the grandkids in tow and distracted by trails, birds, and mischief, I could not fully investigate this unusual growth. Clearly the larger hackberry evidences a burl from which adventitious branches emerge, oddly growing horizontally from the swelling. Is there a fungal or viral infection at play? Or just a physical trigger of contact between neighbors? Next time on this trail I will try to find this peculiarity again for deeper examination and more photos. I’m reminded how often in life and enterprise we find ourselves too late in difficult relationships and circumstances, with consequences suddenly appearing as intractable, with causes nearly impossible to explain and solutions out of reach. Too deep into the agitation to easily extract ourselves from it. I’ve been coached and counseled in such management/leadership situations to first identify the real problem. In this case, the problem is not the odd and seeming out-of-control branching nor the burl; instead, those are the symptoms and results of the real problem. Such is the complication and working of trees… and of life and human enterprises. 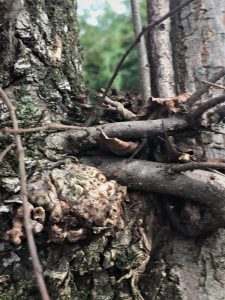 We found a standing, not-too-long-dead hackberry sporting some lichen finery (below left) and beginning to evidence the fruiting bodies of the saprophytic fungi feasting upon the recently deceased tree. 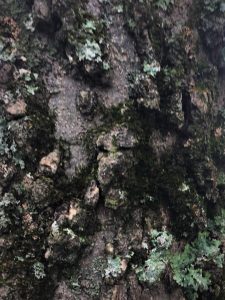 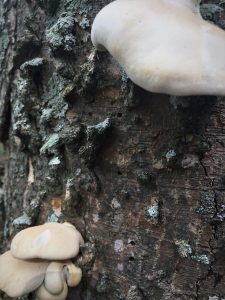 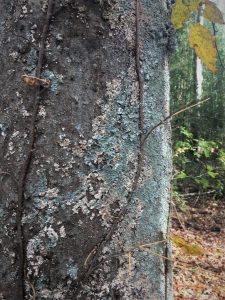 Unlike poison ivy, which clings directly to tree bark by aerial rootlets, scuppernong (Vitis rotundifolia) vines depend upon vines wrapping around trunks and stems. Two vines achieve mutual support via inter-twining (lower left) and a single vine by spiraling around the white oak (Quercus alba) trunk (lower right). Is it magic? No, not literally. But to the grandkids and me… YES! 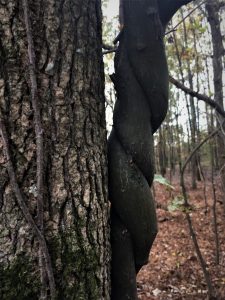 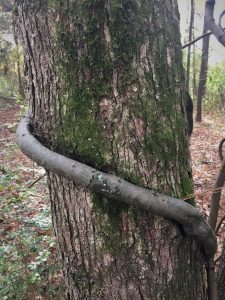 And back to the poison ivy and its profusion of aerial rootlets — no need for intertwining or spiraling around this black cherry (Prunus serotina). Magic? You BET! 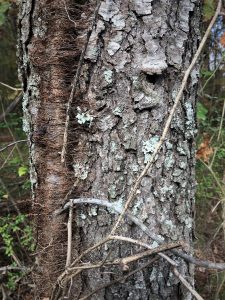 For a moment, I forgot we were in the deep south. This 20-foot sugar maple (Acer saccharum) offered a burst of New England color. Sam carried one of its leaves back to the car. He also looted a much smaller, long-dead bamboo (Bambusoideae) stem to the car. You never know when you may need to blast a woods-resident ghost (he’s a consummate Ghost-buster)! 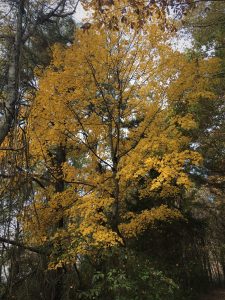 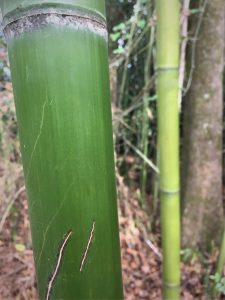 Sam and I found a hiding place behind a twin white oak. I wonder how many more years until the two stems become one. Magic — from Sam’s perspective… absolutely! Confirmed for me when I saw the wonder in his eyes! Magic, too, that the entire time we strolled through this enchanted forest, we heard the nearby incessant clangor, clamor, and clatter of sandhill cranes feeding, dancing, and flying. 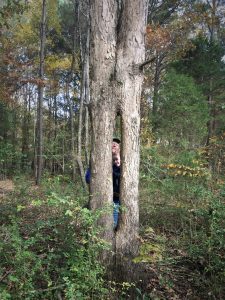 We drove a half-mile to another Wheeler NWR trail north of the highway. What could be finer than this bronze-beauty-cypress framing the view across the Tennessee River backwater?! Again, who can deny the magic and enchantment? 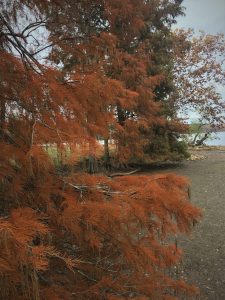 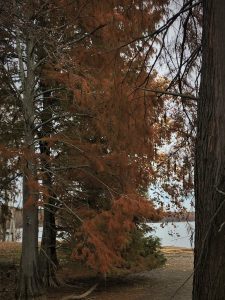 My iPhone camera colludes with my psyche, on multiple occasions willing me to photograph hackberry’s distinctive corky-ridged bark, this one beckoning irresistibly. Who can argue with magic? 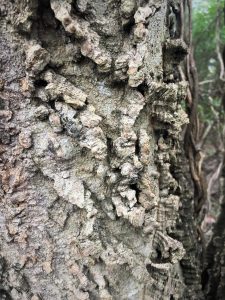 Will I ever tire of Nature’s inspiration? So long as I breathe, especially with the grandkids along, I think not. My torch burns with compelling passion, heat, and light. I want to ignite theirs… to spur their torches to burn long after mine dims and sputters. For the future is theirs. And their sons’ and daughters’. I thank God for this chance to pass the torch, just as I am grateful for those wise souls who saw fit to preserve these 35,000 acres as a Refuge… an eternal flame. Yes, a flame of magic and inspiration!

Wherever you meet this sign, respect it. It means that the land behind the sign has been dedicated by the American people to preserving, for themselves and their children, as much of our native wildlife as can be retained along with our modern civilization.

Feel the Magic; sense the Wonder; pass the Torch. May Nature inspire all that you do!

I wrote my two books (Nature Based Leadership (2016) and Nature-Inspired Learning and Leading (2017)) to encourage all citizens to recognize and appreciate that every lesson for living, learning, serving, and leading is either written indelibly in or is powerfully inspired by Nature. Here are four powerful and succinct lessons I can easily draw from this Blog Post:

Again, feel the Magic; sense the Wonder; pass the Torch. May Nature inspire all that you do!