July 26, 2018 I drove the 62 miles to the Lake Guntersville State Park Lodge, where I met Park Naturalist Mike Ezell. Such a blessing to live so close to a 7,000-acre Alabama treasure. And such a pleasure to have a Park naturalist to dispense wisdom and boost my confidence in plant identification and natural interpretation. My prior solo ventures into northern Alabama’s natural environs left me with not a little uncertainty. I am grateful for Mike’s time and expertise.

Here’s the view over the Tennessee River valley from the Lodge patio 300-feet above water level. We could not have created a better fog-enhanced scene! The rising sun dissipated the fog within ten minutes of the photograph. Glad I left my home at 6:30 AM; otherwise I would have missed the show. 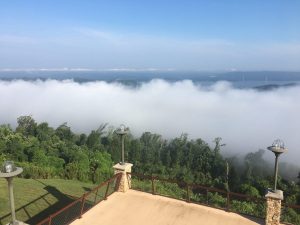 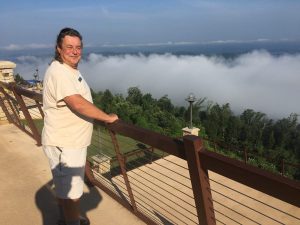 The Park has 35 miles of trails. We devoted some four hours to exploration. We both insisted on walking within the forest… not through it. We refused to allow time or destination to distract us from a deep Nature dive along the way. If something drew our attention, we took whatever time we needed to understand and appreciate. These are two of the signs along the way. The name Graveyard Road doesn’t foretell hazardous conditions or a zombie village; it simply leads to the old King’s Chapel Cemetery! I thought of other names like Deadman’s Curve and Breakneck Road, one from where I grew up! These forests along the lake are rich with history and pre-history. Cherokee occupied these hills and flats for millennia. Hernando de Soto is said to have visited the site in July, 1540. Eighty years ago, TVA’s Tennessee River project displaced thousands of residents and scores of settlements here and elsewhere along the river. The land has many stories to tell. 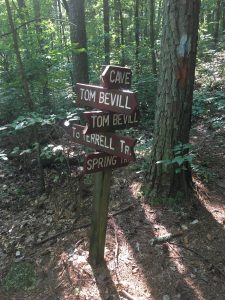 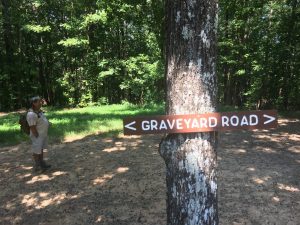 This 30-inch diameter white ash could likely relate a tale dating back 70-90 years. We examined an American beech of even greater diameter, and likely 200-plus years old. It grew on a lower concave slope on what appeared to be a long-abandoned pasture now supporting mature forest and still evidencing old erosion gullies, long-since healed. The beech’s massive crown suggested that it had stood alone in the pasture long before the new forest invaded the abandoned grazing land. I simply failed to snap a photo — shame on me! 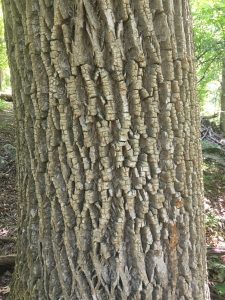 Ah, what a relief to find several specimens of an intermediate canopy tree that had eluded my 100-percent-identification the prior week at DeSoto State Park. Like the elusive trees at DeSoto, we found this individual (12-inch diameter) exhibiting a vertical growth form that is NOT negatively geotropic, a term reserved for vertical tree growth opposite gravity’s pull. Our native loblolly pine and most other main canopy species simply extend leaders 180-degrees from the pull of gravity… hence negatively geotropic. Yes, they are influenced by crown openings and the pull of light, but they remain predominantly driven by gravity’s influence. This species appears to be predominantly positively phototropic, its vertical growth drawn to available sunlight and mostly ignoring gravity’s command. What is this tree? It’s sourwood (Oxydendrum arboreum). Ironically, during my nine years on the forestry faculty at Penn State, whenever I encountered a species I could not immediately identify, I jokingly declared it sourwood. 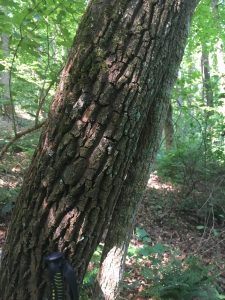 A Natural Truth Nothing is Static

The massive loblolly twin (below left) blew down during the severe storm outbreak of April 27, 2011, pulling up an eight-foot-tall root ball. This is a rich lower slope with deep soil. Dominant canopy trees exceed 100 feet. 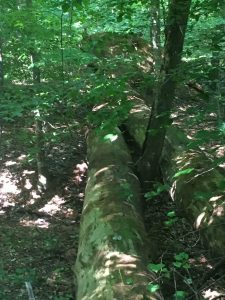 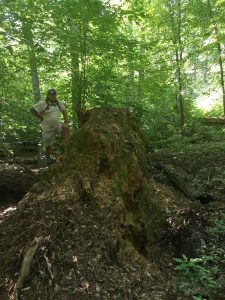 The cycle of life and death is perpetual. Nothing in Nature is static. 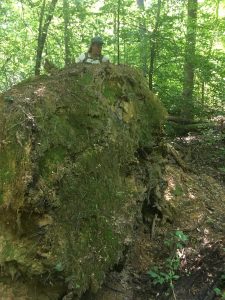 Along the same trail we found a two-foot diameter poplar similarly toppled from its perch above the spring where Mike is pointing. 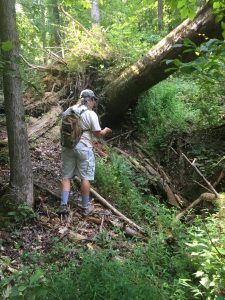 Death is not limited to windthrow. This 12-inch diameter persimmon succumbed to other cause, dying in place while vertical. At least two kinds of fungi are feasting on its still vertical carcass. I believe these are fruiting bodies from saprophytic fungi feasting on dead wood. I saw no forensic hints of the cause of the tree’s demise. 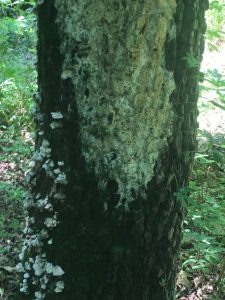 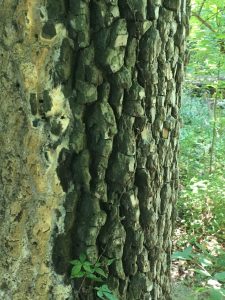 The dead persimmon will eventually yield to gravity, as did the two well-decayed logs below. As I’ve said often, nothing in Nature is static… and every single cell (living or dead) is edible to something else! 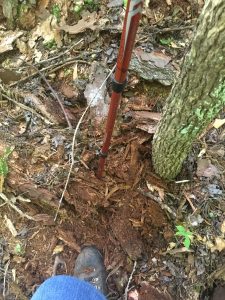 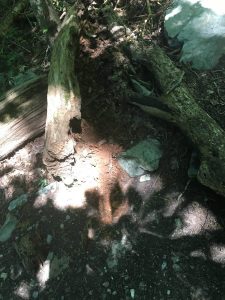 The lower left log symbolizes Nature’s ultimate truth — ashes to ashes, dust to dust. And to everything there is a season, and a time to every purpose under heaven! I’m fascinated by the lower right subject. All that remains of what had been a tw0-foot diameter loblolly pine are its lower still-intact bark and a core of resin-soaked core-wood (fat wood) resistant to decay and standing ramrod upright. 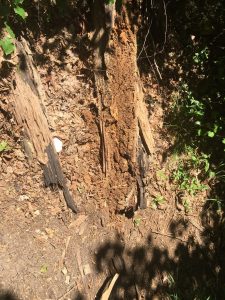 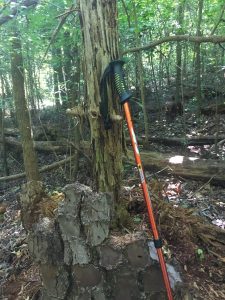 A Spooky Side for Those Who Seek a Scare

Some early Europeans described America’s forests as foul and repugnant, dark and foreboding. Perhaps they saw trees like the ancient white oak below, misshaped and contorted by some agent of infection, almost cancer-like. Even in broad daylight, one doesn’t need much imagination to see face, shoulders, arms, torso, and legs in frontal view. Imagine passing through during the gloaming, already fearful of wild animals and unfriendly Natives, and seeing the nine-foot-tall tree aberration! A northern Alabama Sasquatch! 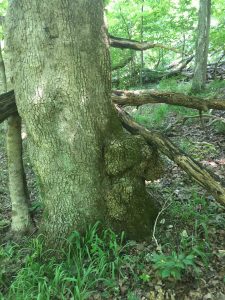 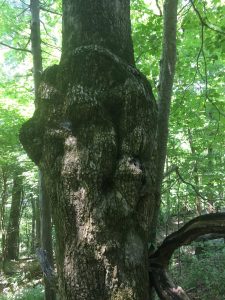 And a Dimension of Bounty and Fruitfulness

Okay, not all is foreboding. We found a quite happy and vigorous 14-inch persimmon near the dead one from above. Hundreds of fallen immature persimmons drew our interest along the trail. Trees often produce more fruit than they can bring to maturity and ripeness. We wondered how many remained above us and when the tree might begin dropping ripe persimmons. 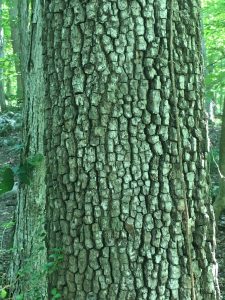 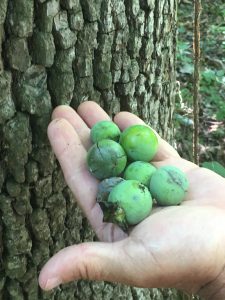 We pondered what story The Cave might tell. Some prior wanderers/residents had expended considerable effort to transform a deep overhang to a rounded-roofed cave. Native Americans? Settlers? Some CCC workers? 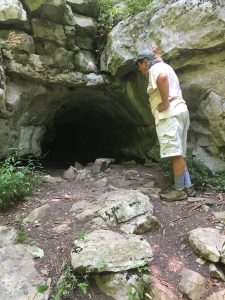 I direct my wildflower enthusiasm to the spring ephemerals. I just don’t pay a lot of attention to those that follow main canopy leaf-out. Mike drove me to a nearby location I will not disclose, where threatened/endangered Appalachian (or Cumberland) rose gentian (Sabatica capitata) appeared in a cluster of a dozen-or-so plants. This lovely species grows only in isolated populations in TN, AL, GA, and NC. I viewed the entire day as a rare opportunity to venture into Nature’s domain with a competent and enthusiastic naturalist. It’s only fitting that we capped such a day with seeing a beautiful rare flowering plant. 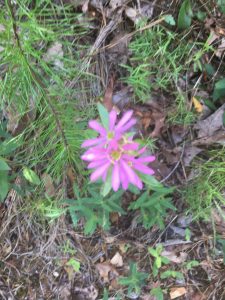 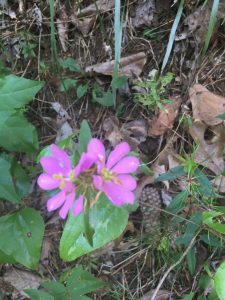 I’ll come full circle to the morning image. We found beauty, magic, and awe wherever we ventured. Lake Guntersville State Park is a treasure trove. Anyone and everyone can access Nature’s wonders. here and at any of Alabama’s other 21 State Parks. 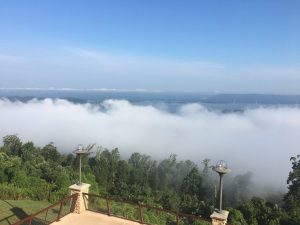 The morning patio view served as the gift wrapping (and a wonderful element of the gift itself). We spent only 4-5 hours ripping away the wrapping and exploring a tiny part of what lies hidden within. The package within varies across the hours of the day and from season to season. Robert Service in The Spell of the Yukon observed, “There’s a land — oh it beckons and beckons, And I want to go back — and I will.” I share his sentiment… right here in northern Alabama. And I suspect the feeling will follow me across the State Park System.

If only we humans were more aware Nature’s wisdom, power, lessons, and blessings.

May Nature Inspire all that you do! 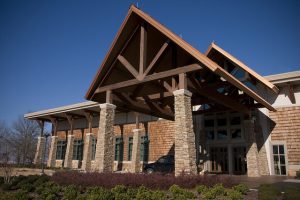 My Nature-related Comments Responding to a PositivelyPositive.com Tribute to...