Thursday March 22 we made our first ever visit to Monte Sano State Park, on the plateau just east of Huntsville, Alabama. It won’t be our last. We circuited the North Plateau Trail, a roughly 1.5 mile counter-clockwise loop (yes, we could just as easily have gone clockwise). We began at the overlook on the east rim, standing at approximately 1,600 feet elevation. When we drive east from Huntsville’s Tennessee River Valley (where we live), we feel as though we’ve returned to our central Appalachian roots. Granted, we both grew up in the Ridge and Valley Province, yet this plateau topography resonates, appeals, and soothes. We left our Cumberland, Maryland home territory 47 years ago. Across our 13 interstate moves and new anchorages, we have consistently marveled at the feeling enveloping us each and every time we returned to that home terrain. Something about it — topography, forests, land use patterns, the feel and smell of familiarity — brought deep nostalgia, and still does. We felt a bit of that homing sense at Monte Sano. I suppose we share some element of what draws a spawning salmon back to the headwaters of birth. 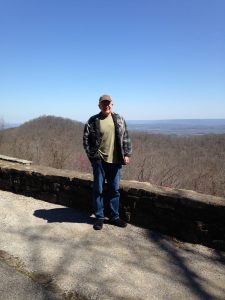 We encountered this two-foot diameter red oak along the north rim a couple hundred yards before we entered a blow-down area. Where I’m leaning, the forest is composed of a typical upland mixture of oak, hickory, maple, and other hardwood species. The overstory is dense. Summer shade discourages most understory plants. Behind me — not a single pine. The same holds for the deciduous-clad hill behind me at the overlook. Again, I felt like we had been transported to our native Maryland Appalachians. I saw no evidence of forest harvesting within this current stand — no stumps. Yet I am certain that this is at least second-growth. The original (pre-European) forest was likely cleared well over 100 years ago, and re-cut for fuel-wood several times since. I’m estimating that the current forest is 60-90 years old. 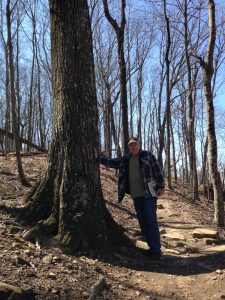 A couple hundred yards beyond that fine red oak, we entered a significant blow-down strip trending west to east below the plateau rim. And just missing the camping area on the flat above the trail. I guessed that the storm struck 2-3 years prior. Crews had cleared trunks and debris from the trail. Most twigs and the smallest of stems had not yet dropped from the fallen crowns; bark still clung to the fallen boles. Had greater time elapsed, Nature would have made more progress in her inevitable progress toward decay and return to the soil. Most main canopy trees had either uprooted to the east or their tops had broken off mid-bole in that direction. I saw no evidence of twisted and tortured breakage; all seemed to have succumbed to linear, straight-line winds. Although the forest disturbance stretched at least a quarter mile, I assumed thunderstorm down-draft rather than tornado. A few days later I hiked the adjoining (to the west) North Alabama Landtrust trails, encountering the same storm path. Our knowledgeable hiking leader told me the storm had struck November 2015. That some suspected an F-0 or F-1 tornado but that it had not been confirmed. After two subsequent growing seasons, the understory, now in nearly full sun, is responding with hardwood sprouts and seedlings, along with herbaceous plants. Nature abhors a vacuum, possessing millions of years DNA-based experience in handling forest disturbance, whether wind or fire. 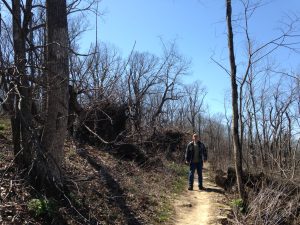 Interestingly, there are those who will say the storm destroyed the forest. Devastated perhaps from our recreational enjoyment or forest products perspective, yet far from destroyed. The soil is intact, albeit a bit adjusted with the wind-thrown stumps. The forest is already well on its way to recovery and full site occupation. Come back in fifty years, when only a trained eye will see any evidence of disturbance, written in the fabric of the new stand. 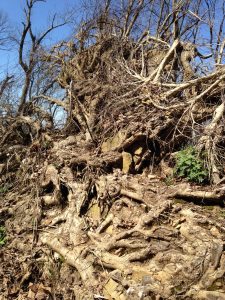 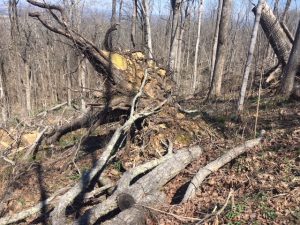 Because we stayed pretty much on the plateau top and rim, we traversed a single ecotype, and limited the diversity of spring ephemerals. We tallied just 12 in flower:

We viewed this hike as an orientation to what Nature offered for excursions in our local area. Had we been seeking a higher tally we would have explored a more diverse habitat. We know the drill and found satisfaction and afternoon fulfillment in an even dozen. My official journal also noted red bud and service berry, both small subordinate canopy trees. 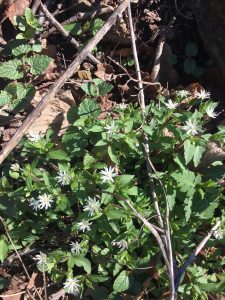 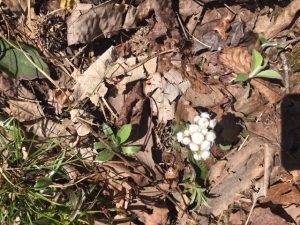 Most of our North Plat Trail hike traversed the relatively flat plateau top. The even-aged mixed hardwood forest dominated. If variety is the spice of life, we enjoyed a spice-less afternoon. Yet, spice-less or not, we relished our explorations. We will revisit from time to time. The variety that we consumed in large doses that afternoon came in form of a spice I’ll refer to as Central Appalachian Nostalgia (CAN). To confirm that CAN is available within 30 minutes of our Madison, Alabama home is priceless. We can feel its power with a short drive. We view it as salve… an inexpensive elixir for a form of home-sickness that will never leave us. A homing tonic. A scratch for a permanent itch. 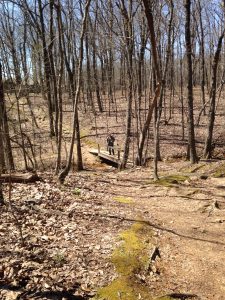 The old saw pronounces that home is where the heart is. Certainly, our hearts are here where we have retired. Yet even the healthiest heart needs care, attention, exercise. Visiting Monte Sano and trekking the North Plat Trail provided some heart medication. Nature can serve up doses of good health — treatment for the mind, body, soul, spirit, and, yes, the heart. Best-selling author Richard Louv calls it Vitamin N, the title of his third book.

I say repeatedly that every lesson for living, learning, serving, and leading is either written indelibly in or is powerfully inspired by Nature. A simple 1.5-mile hiking circuit can be restorative, renewing, medicinal, and inspiring. Judy and I take comfort in knowing that Vitamin N and a full dose of CAN are within easy reach.

Are you finding ample measure of what is within your easy reach? I rejoice that Nature’s beauty, magic, wonder, and awe are there for those willing to look, see, experience, and feel. I urge you to seek it… and feel its power and wisdom.

Announcing the Birth!
Scroll to top