I hiked with a small group of Nature enthusiasts April 2, 2018 (Barbara Roberts, Lisa Hopkins, John and Barbara Kammerud, and Jim Kirkwood). We parked along a winding road in Morgan County, Union Grove, Alabama perhaps six miles south of the Tennessee River, and onto the plateau. We had ascended to 1,200 feet, then began our descent ~250 feet to the trail head. We entered the forest, trending gently downhill to the north. Scattered conglomerate boulders and remnant limestone ledges stacked and jumbled to either side of us as we worked our way into the canyon. We soon stepped into a broad sylvan cathedral… an exquisite cove site with yellow poplar, back cherry, sweet gum, red oak, and associated species. Individuals stood tall (some more than 100 feet) and straight. A luxuriant green herbaceous community carpeted the cathedral floor, the entire cove a verdant concave site of moist and fertile richness. This is as good as it gets in the upland forest world! 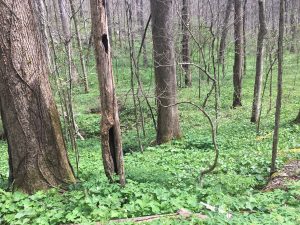 We found the hush and sanctity so spectacular (spiritual) that we spoke in somewhat hushed tones.We imagined returning mid-May when deep shade darkens the cove, and the current forest floor species have completed their annual life cycle. They are, after all, spring ephemerals that share the site with the overstory trees, yet harvest their own early and mid-spring sunshine before the trees leaf out and grab the lion’s share beginning at the close of April. Are these two sets of plants (herbs and trees) competing? They are certainly sharing rooting medium, yet not going head to head for moisture, nutrients, space, and aeration at the same periods of the growing season. I term their relationship as commensalism.

From a draft chapter of a book I am writing, commensalism “is the relationship that exists among organisms residing on the same land area and requiring the same resources from the environment. For example, the mixed forests that dominate the eastern US comprise multiple species per acre, each calling upon that place (in forestry, we term the place a site) to furnish the same six factors essential for flourishing: light, heat, water, carbon dioxide, nutrients, and oxygen. The tallgrass prairie communities likewise consist of multiple herbs and forbs thriving commensally on the same land. The teeming Serengeti grazing herds are yet another example in Nature. When I visit nearby Joe Wheeler National Wildlife Refuge during peak winter waterfowl residency, I see vast fields and backwater assemblages of sandhill cranes, snow and Canada Geese, many duck species, and a few whooping cranes, collectively sustaining as a commensal community. One might conclude that these complex natural communities function as a single organism, one where the whole is greater than the sum of the parts.” 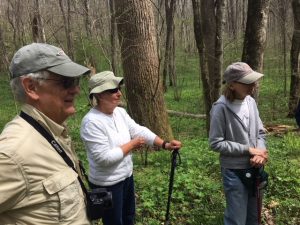 Picture tons per acre of fall foliage returning nutrients and organic matter to the soil, recycling and retaining the site’s productivity. Now imagine the tons per acre of annual organic matter turned over by the spring ephemerals. Leonardo da Vinci observed some 500 years ago, “In her (nature’s) inventions nothing is lacking and nothing is superfluous.” This amazing community is no accident. Instead, the relationships, interactions, and interdependencies have evolved commensally over time… tested, refined, and honed. Nothing in this magical cove is superfluous. Da Vinci also noted, “Human subtlety will never devise an invention more beautiful, more simple or more direct than does nature.” The cove is one such “invention.” Can you possibly picture the outcome were a committee of Congress asked to develop a landscape “more beautiful, more simple or more direct” than this common cove near Union Grove, Alabama. Mark Twain once commented, “Thank God we don’t get all the government we pay for.” I say, “Thank God for the gift of this pale blue orb and its three billion years of Life.” We occupy a living canvas painted and perfected by Nature. Can we enjoy it without ruining it? We must. There is no alternative other than informed and responsible Earth stewardship.

As we descended, I saw evidence of surface water having flowed to the north, most likely during heavy rains, yet nothing in way of a permanent or even seasonal channel. As we moved along, I observed that the cove ahead of us sloped upward away from us. My aha moment — this is the sink… Newsom Sink! Surface (and any subsurface) water goes subterranean at this point, exiting the cove by other than an above-ground stream. I don’t have a lot of field experience in such karst topography. I am much more familiar with following a valley and anticipating an outlet. Here the outlet is the equivalent of a drain-hole. I expected a obvious outlet in the rocks where the runoff would drain. Not so. Instead, the sink appeared to be a collapse in the cove soil. Not just a shallow topsoil depression. The collapse here showed a nearly vertical wall of fertile soil 15-20 feet thick. No wonder the trees stood fat and tall! 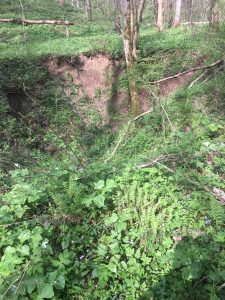 We wondered where water entering this sink found outlet. Once we returned to our vehicles we drove two miles (and several hundred feet elevation lower) to Newsom Spring, where water boils up from a cave entrance, and continues its gravity-fed journey to the Tennessee, Ohio, and Mississippi Rivers and the Gulf of Mexico. Some will evaporate there and feed the southerly breezes that will send it back as rainfall that will once again moisten the rich cove ecosystem. 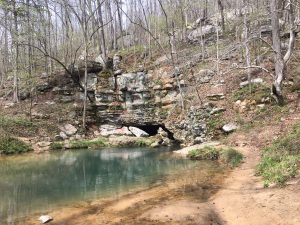 Finding 41 species in flower at a single point in time and place set a personal best for me! Never have I seen such richness and variety. Making it all the more impressive, all of this bounty and beauty occupied no more than a couple hundred acres! Here is what I tallied (Note: first 41 at the Newsom Sink cove; three more at Newsom Spring):

We found only an occasional dwarf crested iris, resplendent in its beauty and simplicity. 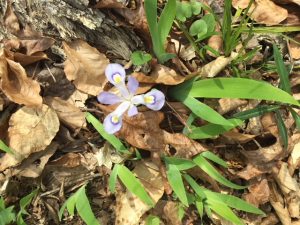 I may have been the only one of us to spot the wood vetch that grew several hundred feet from where we parked. I trekked there around the road bend while the others prepared to enter the trail head. 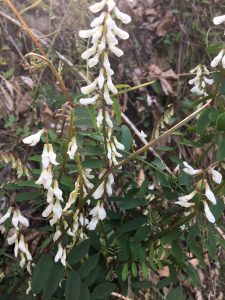 This square foot or so of verdant forest floor offered five species in flower: white and twisted trillium, foamflower, white violet, and rue anemone. Bloodroot leaves are also present, perhaps a week or two past their pure white flowers. 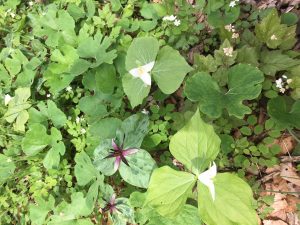 I show this Cumberland mountain spurge not because of any particular beauty (it’s a rather drab yellow-green), but because it carries the name of my Maryland hometown… and because it’s the first time I’ve encountered it. 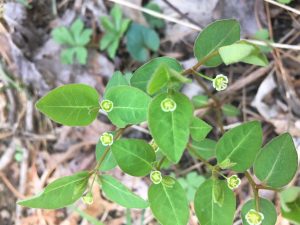 I watch for the unusual, even as I tally spring’s ephemeral bouquets. Here we made note of a funky sugar maple with decorative, contorted bark. I wondered — micro-organism-triggered deformity, or some kind of genetic disfigurement? If the latter, this could yield a new ornamental variety via cuttings and vegetative propagation. At any rate, worthy of a photograph both with and without John standing nearby for scale. 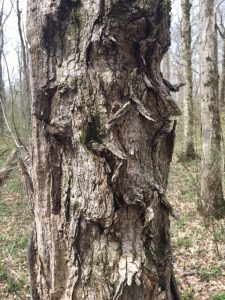 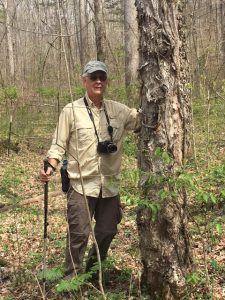 John and I, lagging behind the others after stopping at the sugar maple, discovered and photographed another odd specimen, this one a boxelder snag that had measured ~15-18 inches DBH (diameter breast height, a standard forestry measurement). Similar to the sugar maple bark oddity, this boxelder’s bark and bole express a strange pattern and abnormal appearance. Boxelder and sugar maple are of the same Acer genus — again, does this suggest a disease (micro-organism) factor common to both species? The ten-foot-height break point seems to have occurred at a swollen place with a twisted grain. The upper stem and crown appear to have wrenched apart through some concentrated physical action. It may be the largest boxelder I have ever seen in a forest setting. This species is just not well-engineered for large girth and steely strength. Although I did not photograph the the crown, it simply shattered when it struck the ground. We puzzled over how it withstood the forces of wind, gravity, and physics as long as it had. Perhaps its sheltered cove bottom site, rich growing medium, and the protection of larger more resilient forest trees around it gave it life far beyond its normal years? 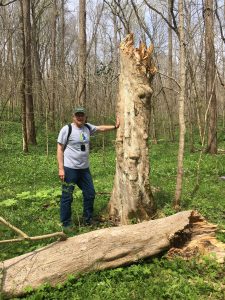 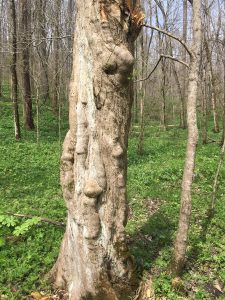 I am a sucker for Nature’s beauty, magic, wonder, and awe. Whether an uncannily rich and fertile cove site, the karst topography, incredible wildflower diversity, or the odd and peculiar maple and boxelder, I succumb to Nature’s spell. Adding to the enjoyment, I hiked with a group who shared my passion and enthusiasm for this special place. A special place I was visiting for the first time.

How many of my fellow citizens know and appreciate that there are treasures like Newsom Sink within reach? How many of the homes we drove past have occupants who drive by the trail head every day without clue (or interest) as to what lies just a few hundred yards beyond where we parked? How many would care even if they knew? Part of the Newsom Sink glory is that it is one of many such gems. We are blessed that such places exist, and doubly-privileged that many are protected from development.

We spent perhaps three hours in the cove. I could have stayed an entire day. What spell might these woods have cast if I had carried a sleeping bag and taken refuge for the night? What night voices would have called? Frogs, toads, owls? What else? And what lessons might I have drawn from deeper immersion? What stories are told in the landscape itself? We hiked along old vehicular trails. What land use actions are written across the century-and-a-half of European settlement? How large were the original old growth trees that the cove supported? What significance did the Newsom Sink have for Native Americans? Surely the cove and its richness offered something meaningful. If nothing else, a botanical medicine cabinet rich with natural healing and prevention variety?

I like relaxing with a good book. Newsom Sink itself is a book unwritten. I saw chapter after chapter emerge within its acreage and across the time it reflects. I am grateful that Barbara Roberts and the group included me. I am eager to learn what other of Nature’s delights await me as I get to know northern Alabama.

How might I condense the Newsom Sink hike into a single photo? Allow me two. Perhaps simply the one-two punch of the dwarf crested iris and the twisted trillium: 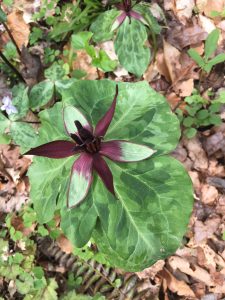 Who could ask for anything more!? Continue to enjoy Nature’s inspiration… and tap the power and wisdom she offers.