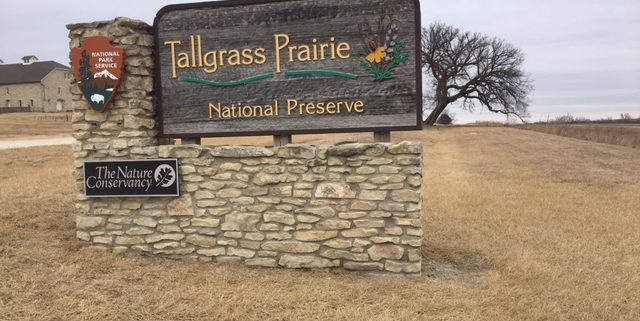 Heading south on Kansas Route 177, Saturday February 10, 2018, we approached Council Grove (38 miles south of Manhattan). The cut-metal Conestoga wagon, oxen team, and rider on horseback greeted us atop a rise on the east side of the roadway. Late that afternoon, having looped south to Cassoday, another 40 miles or so, we cut northeast to Admire on I-335, and then back west to Council Grove, completing a broad sweep through the Flint Hills and prairie cover. As we once again approached Council Grove, we saw a similar cut-metal sculpture of plains Indians. A delightful day of a couple hundred miles of tallgrass prairie, with open horizons, sweeping hillsides, and wind-bent vegetation. 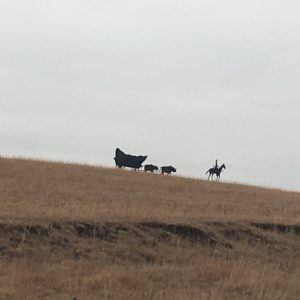 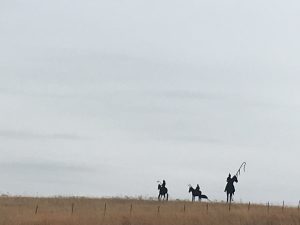 The Tallgrass Prairie National Preserve’s ~11,000 acres border Route 177 (west side) about a dozen miles south of Council Grove. Those ~17 square miles, while impressive, pale in comparison to the 400,000 square miles that greeted European settlers, extending from Canada into northern Texas. A vast and vibrant grazing- and fire-dependent ecosystem that sustained Native Americans for 12 millennia. One of the working properties acquired to create the Preserve had been owned as Spring Hill Ranch by Stephen Jones, a cattleman from Tennessee. Perhaps a bit ironic that the owner who built the ranch house depicted on the sign below shared by name. However, that irony is weakened by my bearing a name that is far too common! 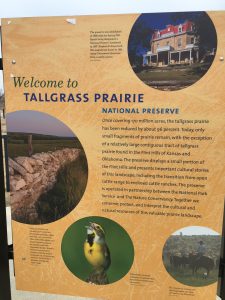 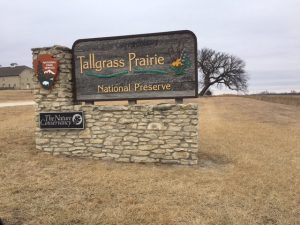 The tawny prairie reached horizon to horizon. This view below had not seen fire in at least a year — perhaps later this spring managers will set controlled fires. When managing southern forest land in Virginia, the Carolinas, Georgia, Florida, and Alabama, I spent many hours prescribed burning… for site preparation (prior to planting pine seedlings) and for understory vegetation management. Most of the time, I supervised ground crews igniting with drip torches. During winter burning in established plantations (to control competing vegetation) we employed aerial ignition by helicopter. I recall the day in Alabama when we burned 4,300 acres, hop-scotching from one tract to the next, as ground crews had already lit backing fires at down-wind stand borders. We then dropped fire in strips perpendicular to the wind, with lines close enough to prevent fire dynamics from igniting live crowns. I offer that personal prescribed burning perspective as the basis for wishing to see prairie prescribed fire in action. Without fire and grazing, the prairie becomes a natural history footnote. 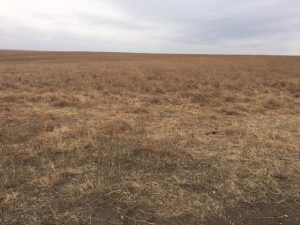 The road below, acting as firebreak, bisects the un-burned prairie to the left from the fall-burn-darkened grassland across the road. The adjacent photo evidences the fall burning to the horizon. Allow me to describe the conditions that Saturday afternoon as I hiked the prairie and snapped these photographs. Try to imagine the north wind buffeting me from 45 degrees to the right, with the ambient temperature 10-12 degrees Fahrenheit. Wind chill 5-10 degrees below zero! Although not reaching my weather threshold for what I refer to in my two books as pleasurable terror, I did weight the degree-of-difficulty experience higher than it might have been! Judy had returned to the visitor’s center after a half-mile, the wind too harsh. I soldiered on, determined not to be out-done by a little winter jab in the face. The photo with the road lies within Windmill Pasture, fenced to enclose the Preserve’s 83 buffalo, restricted to the Pasture’s 1.7 square miles. Yes, that’s buffalo dung on the road. 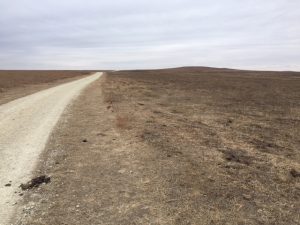 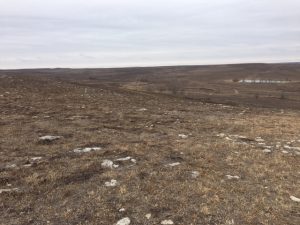 I found reward for braving the cold just beyond the road-photo’s line of sight. Cresting the ridge, I saw bison grazing serenely, paying no heed to the wind chill. I wanted to get closer, but the map cautioned hikers to stay at least 125 yards distant. I may have erred on the longer side. I saw little advantage in being both cold and trampled! And besides, my iPhone battery, cold and drained, no longer operated the camera after I took this last image of the buffalo. Thrilled that I had seen a tiny remnant of the herds that once roamed these Flint Hills, I headed back to the Center. 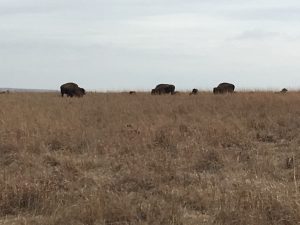 We made our way back to the car, warmed the engine, and began charging the battery while I placed the phone under my thigh and on the heated seat. Before departing, Judy captured this image of my thoroughly reddened face — a temporary badge of courage. Judy used a less flattering term than courage. 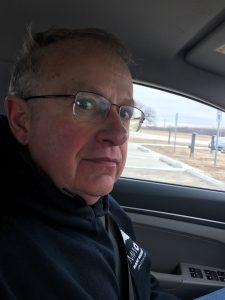 Some of my most memorable Nature ventures have involved conditions less than balmy and springlike. I am a consummate Nature enthusiast, and weather groupie — again, the degree-of-difficulty deepens the memory. Both Nature Based Leadership and Nature-Inspired Learning and Leading include tales of personal ventures in Nature’s pleasurable terror. I think of the old adage of “Nothing ventured, nothing gained,” which applied perfectly to my hike into Windmill Pasture.

Perhaps that is the principal lesson for this blog post — nothing comes without cost, effort, and purpose. I would have felt cheated had I not ventured more deeply. The buffalo filled my heart, soul, and spirit with magic, wonder, awe, and beauty — a small taste of what used to be. And, I felt gratitude that others felt and acted upon the dream of preserving some of this incredible ecosystem for posterity.