I carved out Sunday afternoon time to visit nearby Valley Falls State Park, August 6. The Tygart River Falls, flush with abundant July Rains, provided a great setting to begin and end my four miles through the more-than-century-old second growth forest. 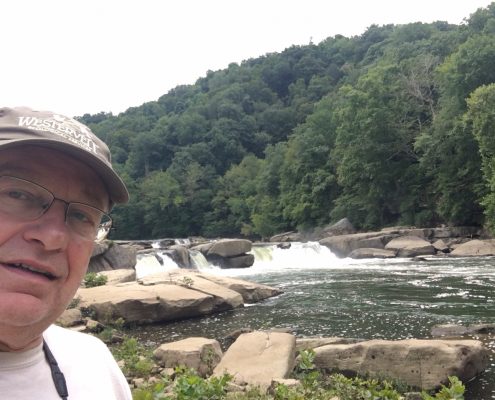 The Park’s 1,145-acres once supported a community dependent upon the site’s lumber and grist mill, first operated in 1827, and now long-since consumed by dis-use, decay, fire, and flood. Little direct evidence remains. The forest is even-aged, naturally regenerated following extensive, and perhaps multiple clear-cuttings supplying original-growth logs to the mill and then fuel-wood for residential use. I saw nary a stump, evidencing both the long period of time since the last cuttings in the late 19th or early 20th Century and that no cutting has occurred in the current stand. I saw more than a few trees in the three- to four-feet diameter range. 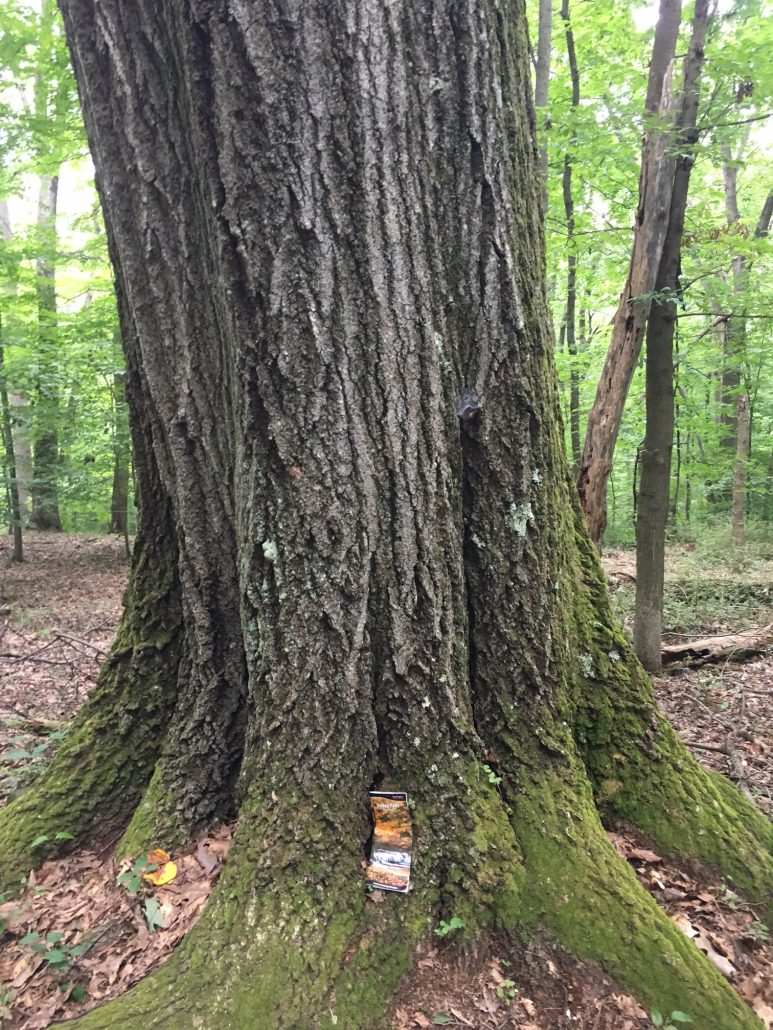 This red oak approaches four-feet diameter at breast height (in forestry terms DBH: diameter breast height, or 4.5 feet above ground level). Many trees beyond are 12-20″ DBH.

The photo below demonstrates that what otherwise might appear to be a maturing forest in stasis is, in fact, a dynamic ecosystem. The trees occupying the stand are competing aggressively for finite site resources: light, soil, moisture, and space, among others. When new growth first began claiming the clear cut forest, tens and perhaps hundreds of thousands of stems per acre fought fiercely. An eastern deciduous forest rule of thumb is that stand development results in two-percent annual mortality. Causes include disease, insects, inadequate light, wind, lightning, beaver, and many others. The feature-photo red oaks, both about two-feet DBH, wind up-rooted one, striking the crown of the other domino-style as it fell, snapping the second at ground level, in a strong straight-line burst, likely during a thunderstorm. The two 90-100-foot stems lie within two degrees of parallel. So much for stasis in a dynamic forest. Because nature truly does abhor a vacuum, seedlings will soon fill the sunlit forest floor under the large canopy opening. 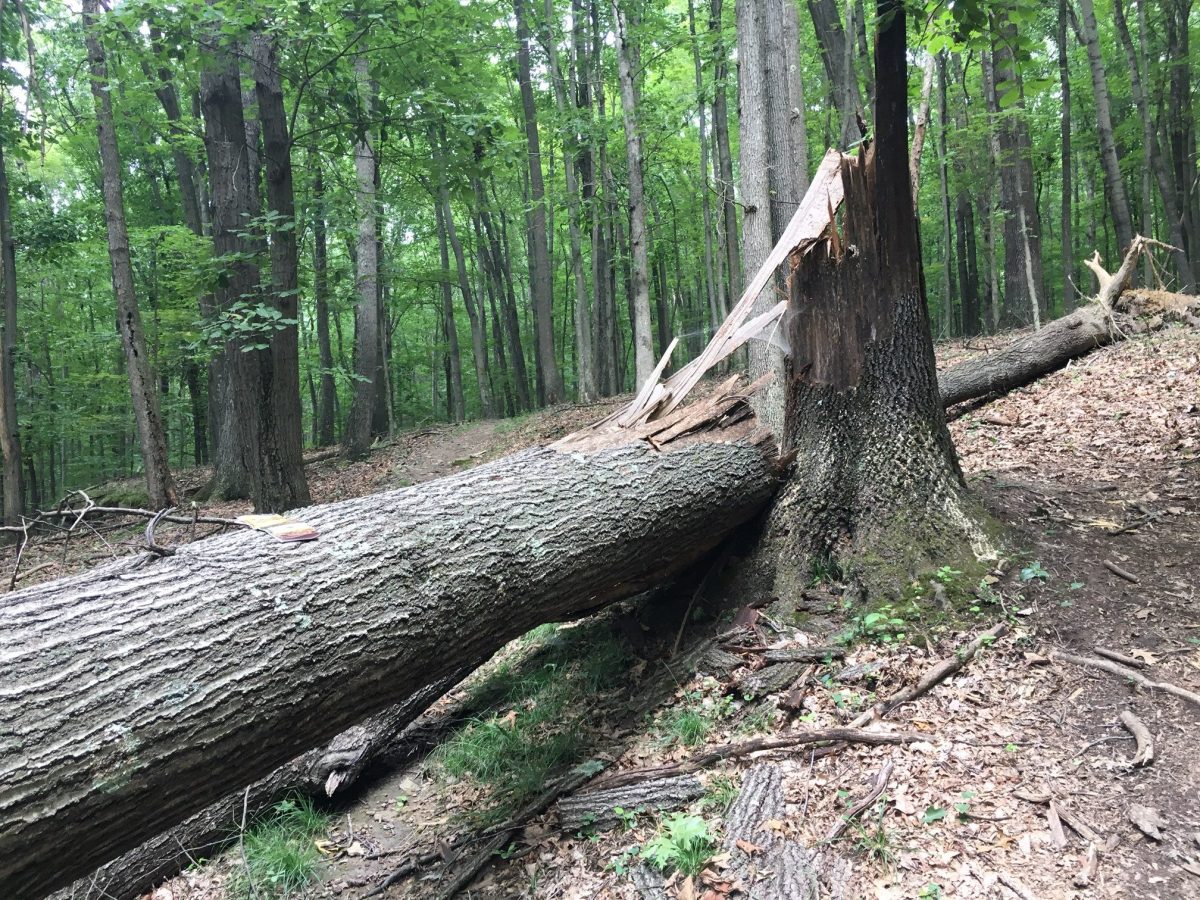 Wind is not the only agent of change. Most mortality is more subtle, inexorable. This 10″ DBH hickory could not keep apace with its neighbors, slowly losing prime access to light and other essential resources… weakening, unable to fend off the unrelenting forces of insect, disease, and poor resource consumption. The saprophytic fungal fruiting bodies are a sign of death, not an agent of demise. Their parent mycelia are feasting on the vertical cellulose buffet. In time, the hickory will yield to gravity, returning its remaining lignin to the forest floor, from where successor trees will once again take it vertical. Again, nothing in nature is permanent. 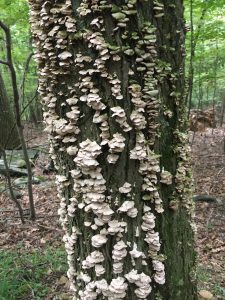 This dead, until-recently-standing red oak (18″ DBH) has crossed the strength threshold for balancing the above ground mass. An adjacent

crown has temporarily halted its slip to full horizontal. Gravity always prevails, and this stem, too, will soon fall to the ground, where it will decay into the soil and, as all living matter does, recycle once more into the living. The forest tells many tales. A four-mile hike can spin a century of life… and death, for those able to read its language. For those who look, see, feel, and interpret.

This old sentinel probably predates the even-aged stand. Its large girth and course crown (mostly dropped) evidences that it grew open for some time, perhaps shading an early residence along the road that is now the trail. Maybe it provided some welcome shade at a concentration area where laborers placed wood on skids for transport to the mill or community. If only it could relate its story. Had I dallied longer at this milepost along my own route, I might have read more from the land. My journey was quick; the forest’s sojourn covers well over a century. Note the human nature touch on the adjacent beech tree. I did not notice the carving of initials and date until I viewed the photo at home. I walked alone; perhaps a couple had passed hand-in-hand, and left the mark of their feelings? 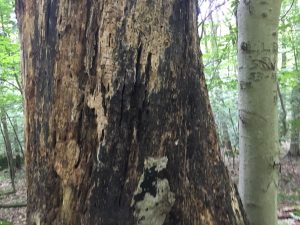 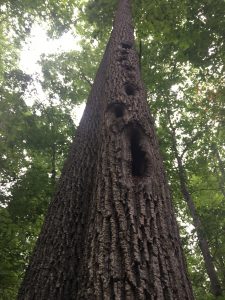 Even this healthy, full-crowned, dominant yellow poplar shows a scar or two. These now-healing wood pecker excavations have left a physical mark, opened a court to fungal invasion, and may one day lead to stem failure. Why this tree? Why here along this stem? What tasty morsel attracted the pileated woodpecker? I show it here only as evidence that nothing in nature is static — not even for this magnificent yellow poplar, reaching 110 feet above its 36″ DBH trunk. I also include it here because it evokes an image of that brilliant soldier of the forest pounding for insects on a late spring morning, resounding and echoing across the wooded hills, perhaps reaching the river below.

I ended my hike back at the river, above the old mill race. These waters will still flow long after that poplar returns to the forest floor, decays, and is recycled through ten thousand more such forest fauna and flora. Nature is restless and relentless. Her lessons are persistent and powerful.

I conclude a powerful lesson from my hike: nothing about your business, enterprise, or life is permanent. Don’t count on anything to remain at stasis. Change is inexorable, occasionally predictable, sometimes not. Gravity and the passage of time are certain and reliable; little else is. To the extent you are able and willing, open your eyes to the world around you, and learn from it.

Drawing this post to closure, I offer two relevant observations applicable to the work of Great Blue Heron, LLC: 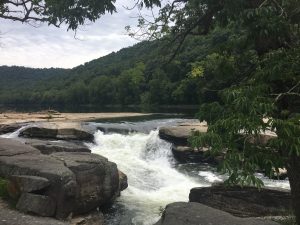 Featured Photo: Everything is static… without the passage of time; stasis does not exist in Nature!

“The world is full of obvious things which nobody by any chance ever observes.”