I write often of our idyllic life on Big Blue Lake. My bubble of peace and tranquility burst recently.

Occasionally life events remind me that not all people share my love for Nature.  June 6, 2018 brought such an event — a rude and real wake-up call that even here on Big Blue Lake (BBL) we do not all subscribe to Steve’s gospel of Nature appreciation. Not everyone shares my belief that here on BBL we’re blessed with peace, beauty, and tranquility (photo looking south from Legendwood Drive): 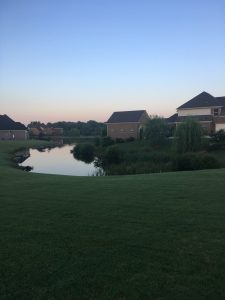 June 6, 2018, I witnessed an act of violence here on the northernmost of our development’s three ponds. I’ll term the perpetrator No-Nature Vigilante (NNV). Wearing a hospital breathing filter, broad-brimmed hat, eye protection, jacket, and rubber boots, NNV committed the act in broad daylight, brazenly spraying some type of chemical herbicide on the willow and cattails bordering the shoreline along the north and west sides of the pond’s neck that reaches up to Legendwood Drive.

NNV refused to stop when challenged by the homeowner along whose property NNV was spraying. NNV expressed anger, referred to us as “you bastards,” threatened to have a spouse “come over here and shoot you,” refused to identify the chemical in use (I requested to see the label), and indicated that this is common property and “I can do as I wish.” NNV protested that the chemical is “non-toxic” and “safe.” I wondered why the protective gear. When we began snapping a few photos, NNV paused briefly and encouraged us defiantly to take a photo, saying, “Here, I’ll smile for you.”

I saw an angry, violent, seemingly irrational act of aggression toward pond-shore vegetation and full ambivalence to the feelings and genuine concerns of neighbors. NNV implied that our Home Owners Association (HOA) had failed to act and that led NNV to this harsh individual action. In fact, the HOA had hired a contractor who early this spring cut and removed all pond-shore woody vegetation to ground-level, a willow treatment recommended by an aquatic resources specialist from Auburn University Cooperative Extension.

NNV’s wild and irresponsible act evidenced a sad ignorance of Nature. I took the photo above early the next morning… before much foliar effect was visible. Before the violence evidenced injury and degradation. Before the insult and savage attack painted a raw wound on our cherished pond. Here are photos from early morning June 12, six days after the spraying: 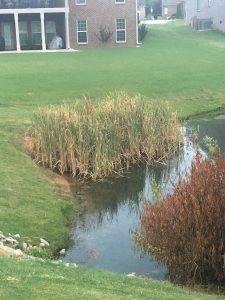 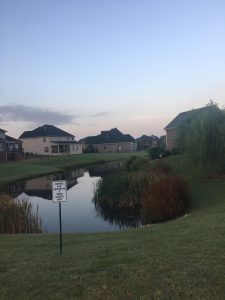 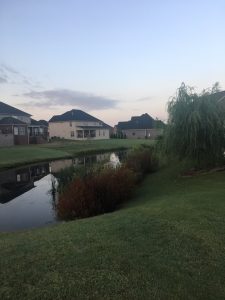 An Affront to Sensibility and Decency

We bought a pond-side lot because of our appreciation for Nature. We enjoy the tranquility and revel in the bountiful birds, fish, frogs, turtles, and other critters drawn to the ponds. Obviously NNV doesn’t share our enthusiasm for these blessings.

Aldo Leopold’s 1949 A Sand County Almanac and Sketches from Here and There is an environmental classic. The 1989 edition carries a foreword by Robert Finch:

The “Sketches” are a record not only of loss but of doubt, of disillusionment with both public sensibility and official policy. In a meaner nature such criticism might have become mere self-righteous condemnation. But Leopold’s instinct was always to educate rather than condemn. Though there are genuine bitterness and pain in these essays, he (Leopold) remained convinced that most environmental mistakes are due, not to some inherent baseness in human nature, but to ignorance. He understood that his own ability to perceive and understand how nature works was the result of a long period of education and self-education.

Was NNV driven by anger and resentment? I believe so. Did NNV commit such a vile act due to some baseness of human nature? Unfortunately, I believe so. Did ignorance drive the action? Yes, gross, almost incomprehensible ignorance. Do I believe that education may be a route of solution? I fear not; I sensed only a self-righteous disregard of anything beyond a mind absolutely made and certain. Regardless of motive and sentiment (malice or not), we residents are left with a pond-side scar… an affront to our sensibilities. Browned and desiccated foliage. An insult to pond aesthetics.

I sent a letter to our Home Owners Association June 11, excerpted here:

Now, to whom does it fall to remove the vegetative skeletons? What damage might have been done to the water; to birds, frogs, turtles, and fish? I doubt that the chemical employed was approved for direct application to water, even if NNV had been authorized by our HOA to spray. I am sure that given the evidence of foliar damage and the location of the plants, NNV sprayed chemical on the water. Should not the HOA report the facts of this disturbing environmental assault to the appropriate regulatory agency?

We are a community of friends and neighbors. We rely upon the HOA to address matters that impact the collective. This act of unauthorized violence flies in the face of a community of concerned and allied citizens. I am deeply offended and terribly disappointed by NNV’s actions and attitude. I ask that our HOA investigate and take appropriate action to treat the scar and assure that such vigilantism is not repeated.

I will close by simply pondering why one so hostile to the environment would choose to live so miserably along the shore of a pond where I daily see and feel magic, wonder, beauty, and awe.

I am saddened, angered, frustrated, and dismayed. This episode lies outside my zone of acceptance and understanding, yet I must accept that one of my neighbors would commit this atrocity. I know, nobody died; I did not take NNV’s threat of “shooting” seriously. I am hardened to the verbal assault and name-calling. Long ago, Mom told me more than once, “Sticks and stones may break your bones, but names will never hurt you.” Yet I am deeply offended and set aback by NNV’s insult to Nature along BBL. The act violated all that I believe and embrace about Earth stewardship. And with respect to community-living… and respectful civil engagement.

A bright side? Perhaps a teachable moment for me and my cause. A stark reminder that even Leopold’s instinct was always to educate rather than condemn. A wake-up call that much work is yet to be done… beginning right here in my immediate neighborhood. Another positive outcome — an anecdote fresh, apropos, and compelling. Fodder for this Blog Post. A catalyst for action and corroboration that my work is necessary… my cause is worthy.

I hold confidently to my assertion that Nature inspires and informs every lesson for living, learning, serving, and leading. NNV certainly did not believe such to be true — in fact, NNV never considered anything remotely relevant to Nature-Inspired Living and Learning. NNV neither looked for or saw the beauty, magic, wonder, and awe afforded to us residents along Big Blue Lake. Instead, NNV looked at the pond-side willow sprouts and cattails with loathing and disgust. NNV acted with repulsion toward the very elements that attracted many of us to live with Nature on BBL rather than in conflict with it.

May Nature continue to bless and inspire all that you do. Let’s strive always to educate rather than condemn.

June 13, 2018, crews removed the sprayed willow, leaving the deadened cattails. Mercifully, some of the cattails stayed sheltered from the mad herbicide sprayer. We have an HOA meeting June 19 — I hope we discuss the implications of NNV’s actions. 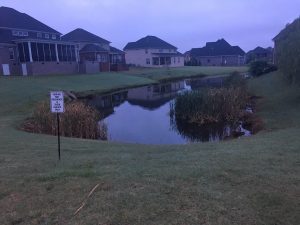