It’s been a while since I posted a simple Big Blue Lake update. For those who need a reminder, we built our retirement home (December 2015) on a four-acre pond/lake in northern Alabama’s Tennessee River Valley near Huntsville. Ours is the largest of a string of three bodies of water. We chose the lot because of the water and the feeling of openness it gives us even in a residential development. We underestimated the incredible peace of mind and sense of wildness it provides. In my younger years, this now aging forester would have seen only the homes ringing the shoreline, and with some measure of contempt for the urban invasion. Now I see only the pond, the open views, and the rich wildlife attracted. I keep a journal and occasionally post an essay updating life on Big Blue Lake, along with a few photos. Below is the view to the south from our back bed; a four-foot wall drops to a grassy strip along the shore. I snapped the photo to avoid showing the houses! 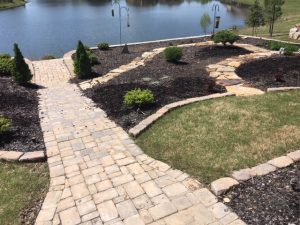 My April 18 post announced the April 7 hatch of our four killdeer eggs. Since then we’ve seen both parents and the four youngsters numerous times along the shore and even in our elevated beds. When I wander too close, one or both parents still peent shrilly and do a modified broken wing act. Today (April 27) at day 20, I watched the parents chaperone the youngsters on our lot and the lot east of ours. The hatchling (below left) appears nearly identical to the adults (below right). The wings are smaller (another week or so to first flight) and the body mass at ~50 percent. Both birds are on blocks of the same size. The two parents are in the lower right photo (one about to exit left on the flagstone path), attempting quite noisily to cut me off from the little guy. 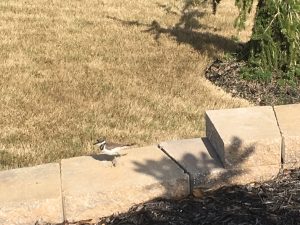 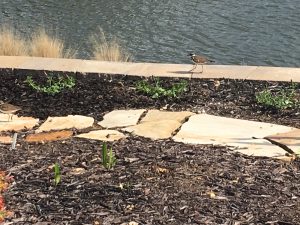 At this southern latitude, the parents may already be contemplating a second brood. Will they choose our lot?

I mentioned our setting goose in that same April 18 post. Today she has been setting 25 days. Audubon says incubation period is 25-28 days. She seemed antsy today, occasionally standing over the eggs (lower left). Lower right she is on the nest at shoreline where the two shades of grass mark the property line between our lot and the one to the east. The wall-top is where the adult killdeer stood; the youngster was around the corner to the left. Once again, I took the photo to crop the houses. The male floats or sits within sight. Pity the hapless males of his species who dare trespass on his kingdom. He lowers his head and charges after them, sometimes biting tail feathers and occasionally forcing them underwater. Who says Big Blue Lake is not wild country! 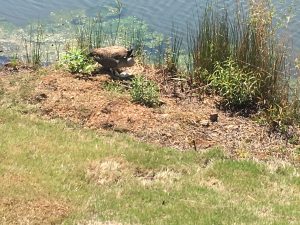 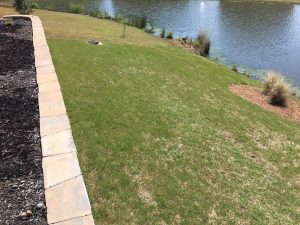 Big Blue is our resident great blue heron. I say resident, yet I know he does not live exclusively here. We have seen him at BBL five days this month. Granted, it has been an unseasonably cool April and I’ve recorded 8.87 inches of rain so far (April 27). So, we have not spent a lot of time on the patio. We watched him arrive from the east yesterday afternoon, land at water’s edge, and subsequently feel the wrathful assault of a male red-wing blackbird that I assume is defending territory or a nest nearby. Big Blue retreated to the northern neck. A few minutes later he flew at near water level to the second pond.

I know that ospreys are not unusual here in the greater Tennessee Valley region, frequently spotted at nearby Joe Wheeler National Wildlife Refuge. Here on Big Blue Lake we have seen red tail hawks soaring. I mentioned in that same April 18 post that a sharp-shinned hawk had recently hunted aggressively at our feeders. I had never seen, nor did not expect to see one of the region’s most magnificent avian predators. Mid-afternoon April 23 just as a shower began, I saw a large white-underbellied, swoop-winged shape appear from the north directly over our patio roof at about 100-feet above lake level. I recognized the shape immediately as an osprey. The bird circled and wheeled for 3-5 minutes, constantly peering down at the water’s surface. Twice it dived rapidly toward the surface and each time pulled up. Mallards on and along the pond raised a cacophony, I suppose protesting the marauder’s intrusion on Big Blue Lake’s tranquility. Once more I cheered the bird of prey; I wanted to see the osprey strike. No photograph — just an indelible memory. And, yet another infusion of wild into my sanctuary.

April 25, two little blue herons appeared on our southwest shore; today a single stopped by on the west shore. I noted last year’s first appearance as May 5. We saw as many as five at one time last year deeper into May.

Last year February 2, we spotted two hooded mergansers, a first BBL sighting for us. We saw no more after March 21. We counted as many as five. This year, we returned from a week in Kansas February 12. Twenty-six mergansers greeted us! Why a peak of five last year and now 26? March 12 we recorded a high-count of 48! We saw the last of the mergansers, a single pair, April 1. I need to know more about these beautiful diving ducks. How far south had they spent the core of winter? Where are they now breeding? What in the world did they eat during their six-week feeding frenzy here? We watched them make dive after dive hour after hour. Did any small fish survive their incessant onslaught?

Our barn swallows returned March 23. The past few warmer evenings they’ve numbered 12-15, swooping and skimming above the water, often dipping bills. Their aerial antics entertain us.

We first noticed eight ducklings trailing a female mallard a week to ten days ago; I neglected to note the date. The count has since dropped to seven. Life is tough for little ones on Big Blue Lake.

A very wet April. Looks like we will close the month at 8.87 inches, more than twice the monthly average. Year-to-date we stand at nearly 25 inches, ten inches above average.

I won’t attempt to offer esoteric lessons from Nature to close this Big Blue Lake update. Instead, here are a few rather simple conclusions:

Although I have kept the neighborhood houses out of the other photos, I could not eliminate them from this final photo. A symbol that Life is Good! 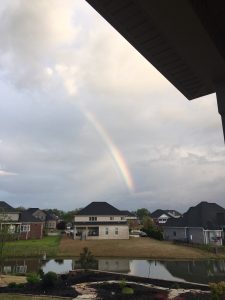 Rather than revise this entire post written April 27, allow me to simply leave it as is and add this update. First and foremost, our geese hatched early morning April 30. Before we departed to activities elsewhere Judy and I saw three little heads bob in and out of the nest under mom. Upon returning early afternoon, we found an empty nest. We explored a bit, finding mom, dad, and six still mostly yellow goslings along the shore around the corner some 200 feet from the nest. They soon entered the water, the six staying closely packed between the parents. 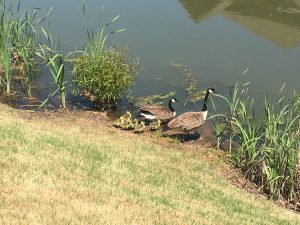 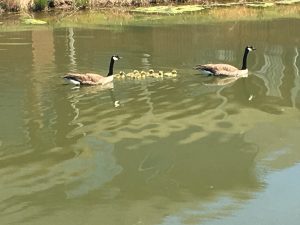 When we returned at deep dusk from a grandson baseball game, mom was back on the nest, dad resting within six feet, the goslings invisible. We assumed under mom’s wings. The next morning, not long after sunrise, the entire crew headed off to the same shore where we first spotted them on Day One. 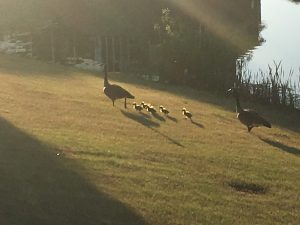 By mid-morning they had worked their way to Big Blue Lake’s south end. We are celebrating their successful hatch and wishing them well. The lake is home to at least two large snapping turtles and a healthy population of largemouth bass. Toss in our resident hawks, a few snakes, raccoons, and skunks — the parents have their hands full with keeping these intrepid little adventurers safe. [Note: May 2, evening — and now there are five. We saw the family on the east shore and made a firm count of just five.]

Late morning May 3 (Day Four), the parents brought the five remaining youngsters into our back yard, where the gander occasionally wandered during the incubation period to beg for treats. The family looks robust… the goslings noticeably larger: 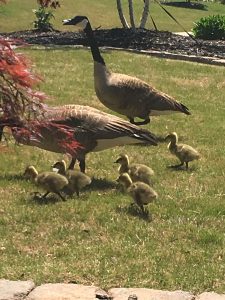 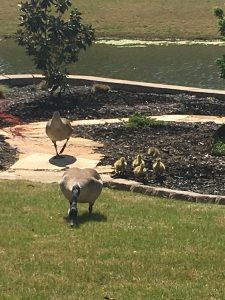 May 4, 2017, we noticed an apparent nest depression in the four-foot-diameter bed where our killdeer couple nested May 2017. We observed both expectant parents taking turns deepening the nest, furiously tossing our bark mulch with backward scratching. Two days later, we spotted egg number one (below left, three inches from the Japanese maple stem)! Below right, mom does her best act to protect the nest by drawing my attention. The on-nest parent scolds us every time we venture near. 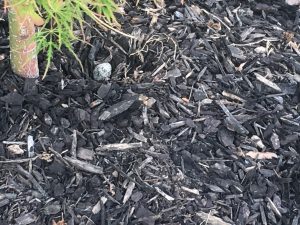 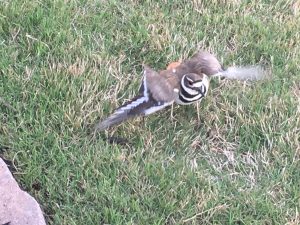 May Nature Inspire all that you do.

Note: I am available for Nature-Themed motivational/inspirational speaking and writing… for NGOs, businesses, landowners, agencies, and Nature-oriented enterprises. Contact me at: steve.jones.0524@gmail.com