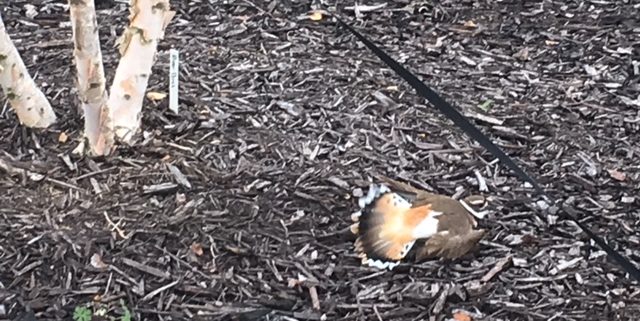 I devote most of these Great Blue Heron blog posts this time of year to experiences in the woods and reflections regarding spring wildflowers. This one is avian-oriented. Its been a banner week for our feathered friends right here on Big Blue Lake… and nearby.

Last year our killdeer tenets did not nest until late May, and fledged four offspring in June. Read about last season in my 2017 blog post of July 5 (http://stevejonesgbh.com/2017/07/05/four-new-killdeer-residents-deep-lessons-partnership-nature/). Last year’s nest sat in a four-foot-diameter bed (home to a small lace-leaf Japanese maple) no more than a dozen feet from our back patio. An otherwise mid-lawn nest location that we could not help but disturb with mowing and other activities. We agitated the parents incessantly, especially given their early summer occupation.

This year, the parents (we assume the same pair) started a family early the second week of March. March 13 we counted a fourth killdeer egg, and immediately they began serious egg-setting. During the four days prior, they mostly neglected the one, two, and then three eggs (left photo below). I suppose with the fourth, completing the clutch, the time had come to begin incubation to assure that all four hatched concurrently. They chose a much better location this year, well into the major back bed that covers 2-3,000 square feet, at the base of our river birch. We seldom disturbed them (broken wing diversion act below right). 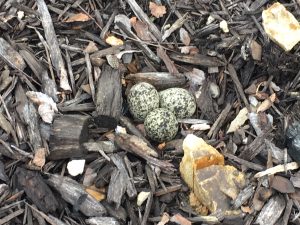 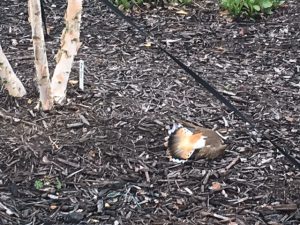 The reference books say incubation extends 24-28 days. April 7, day 26, all four hatched over the course of the day. A cold front had passed during the night. The April 7 high temperature came at 2:00 AM. Wind, occasional drizzle, and thick clouds dominated, with temperature falling into the upper 30s by mid-afternoon. A parent huddled over the nest all day, wings extended over the hatchlings. We watched as first one, and then others would pop out, briefly explore, and hustle back under her wings. The day set a record cold high temperature. The non-setting adult stayed close, ready to lure me away if I dared approach. We observed shift changes, with one parent relieving the other. The photos below are poor, evidencing the low light, my hesitancy to intrude, and the tiny size of these guys. The left photo shows two on the nest (about 6-8 inches to the lower left of the birch stem) and one wandering to the left margin.  Two nestlings are visible in the photo (below right). I felt guilty forcing the adult to rush away. 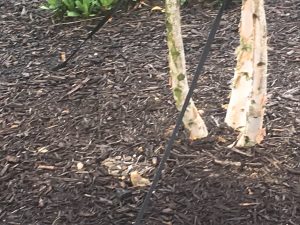 The literature indicated that the family would soon depart, with both parents tending the brood as the little ones gathered food on their own. An attending parent snuggled all night, and was tight on the nest at the next day’s dawn. The morning temperature tied a record low of 27 degrees. Fortunately, the sun rose with purpose. Soon the nest saw full sunlight, with resultant warmth. No longer needing protection, the little ones sprang into action, exploring the bed and keeping both parents occupied.

The group began departing within an hour. The large bed is bordered lake-side by a four-foot wall to the downhill. The adults had to carefully usher the brood to the point where the wall met the grade-line. An adult stands on the flagstone pathway (below left). One of the young is along the wall top-stone at the right margin of the same photo. The four-foot drop to the shore at that location did not offer suitable access. The adult eventually turned the youngsters to the no-drop alternative. The second photo (below right) shows a little guy standing on the flagstone with another faintly visible to the right of the cast iron shepherd’s crook base. 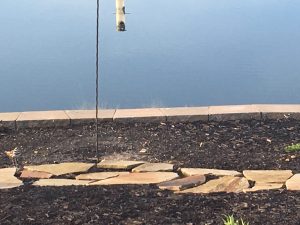 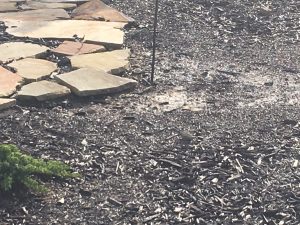 By noon, both adults managed to escort the youngsters to the lake shore. An adult below is staying close to a young one about a foot to the adult’s left. Please keep in mind that I am using an iPhone at full magnification, again trying to avoid intruding into the parenting mission underway. So, we celebrate a successful launch! We kept them in sight for an hour or so. We haven’t seen them since. We wish them well. Our references say that in these southern climes, killdeer often produce two broods. Last year’s late May venture may have been the season’s second. Because we were involved in major landscaping early last spring, our back yard would not have been available for a March/April clutch. We’ll keep our eyes open for additional nesting mid-May, after this first group has fledged. 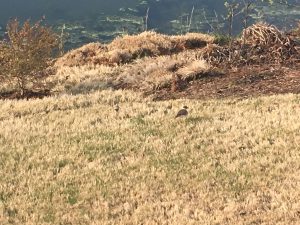 Another Family in Progress

A month ago I watched a goose begin establishing a nest at the border of our lot and our neighbor’s to the east. Momma is in full setting mode. I cannot get an egg count. When she leaves the nest, I have seen only the down she has placed over the eggs. I had hoped to examine more closely but both parents rush over immediately. This may be the same pair whose eggs attracted a predator last year (see my June 6, 2017 post: http://stevejonesgbh.com/2017/06/06/natures-triumph-tragedy-big-blue-lake-april-21-2017/). We’ve seen the large snapping turtle off-shore several times this spring. Will this year see a repeat tragedy or a successful hatch? 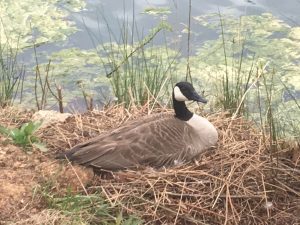 The male visits us frequently, gathering sunflower seeds beneath the feeders and seeking handouts from us when we are relaxing on the patio. 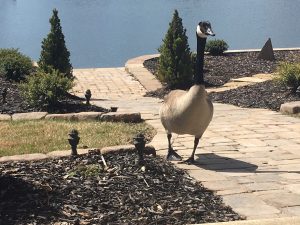 We find life on Big Blue Lake rewarding. Over the past few weeks we have recorded:

April 13, I watched in wonder as a sharp-shinned hawk pursued a red-wing blackbird. The pursuit began near our feeders, looped wildly over the water three or four circuits, and the two eventually streaked to the north at the west side of our lot. I way-too-slowly rounded the house, seeing nothing. Only once did the hawk come close to grabbing its prey, above the water as the blackbird dived toward the surface. The hawk, faster at that maneuver, came within inches before the blackbird lifted laterally. I must admit to being a less-than impartial aerial-action-observer — I wanted to witness my first capture and kill. Again, choosing sides, I have concluded that we have plenty of red-wing blackbirds, and we find the males a bit too bullying at the feeders. Two or three times over our first two years here I’ve found feather debris along our back bed wall, the most recent clearly from a mourning dove. The action is occasionally fast and furious along Big Blue Lake!

Nearly ready to say that this draft is final, I stepped onto the patio late afternoon Monday, April 16, and noticed a female mallard swimming shore-side with a blurry ball following her. I ran for my binoculars. With magnification, I saw 6-8 (could even be more) tiny ducklings, clustered at mom’s tail, too far away and the ducklings too small for a clear count. I guessed that at most they are 2-3 days beyond hatching. April 21, 2017 we made a firm count of 13 tiny mallards with what I presume are the same parents. Life is Good on Big Blue Lake!

As I have said many times, although homes border the entire shore, I narrow my attention to the lake and its life, bounty, action, and beauty. I know the houses are there but I refuse to focus on them. What I see, in fact, is my daily bread.

Our daughter called the morning of April 17, asking how to find the nearby heron rookery I had visited April 13. She wanted to drive a mini-bus-load of her THRIVE assisted living residents to show them. Judy and I volunteered to meet her and lead the vehicle to the parking area near the rookery: 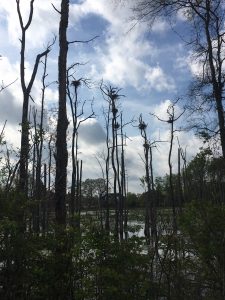 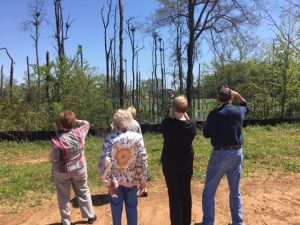 We watched the rookery action a while before we began noticing that most nests had young visible. One to three heads and shoulders… an occasional small wing spread. Nest chatter filled the air. Not a quiet moment. Adults came and went at intervals. As I spoke with the residents after we returned to the mini-bus, they expressed deep appreciation and absolute joy. Katy asked me as we descended the stairs, “If I can arrange another group for this Friday, can you meet me again?” Several of the group piped up enthusiastically, “I’m coming, too!”

Katy telephoned after we departed to tell us that her eight residents loved the experience. One lady commented to her, “I am 84 years old and I have never seen anything like this.” Judy and I drove the ten or so miles home with a warm feeling of satisfaction. Nature is a powerful contagion and a timeless elixir. What a thrill to share Vitamin N!

I submit that we can find what we seek. Nature is ubiquitous, even in the predominately urban setting where we reside. I intend to relish Nature’s gifts. I have always been a glass-is-half-full guy, and I will never divert from that life philosophy.

May Nature continue to Inspire you!