What’s a ‘U’? One of the 26 letters in our alphabet. A little less than four percent of the total, with a frequency of usage rate even lower at 2.758 percent (Wikipedia). Yet, look at the Feature Image for this post. Fairmont State University women’s tennis hosted our first home competition of the season several weeks ago. A couple days prior we had taken delivery of our new wind screen to lessen gusts and air turbulence on the courts. The old one was tattered and frayed. The vendor placed the new just in time for a breezy home encounter. We played the match, but with no small measure of embarrassment. The vendor had presented us with a bargain — gave us an extra letter. We swept doubles and singles play — winning on the Fairmount State University courts. Of course, since then the vendor has made good on the error. 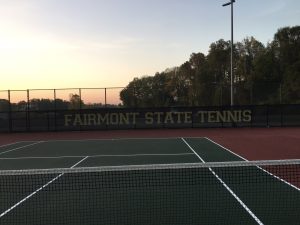 Errors are common in Human Nature. A business committing too many mistakes finds itself struggling to generate profit. An individual similarly oriented likewise falls behind. Yet I have observed many times that I seldom have learned by doing things right. It’s the mistakes I’ve made and observed in others that teach deeply. I recall hearing the inarguable wisdom that experience is that thing you get right after you needed it! Thomas Edison famously quipped, “I have not failed. I’ve just found 10,000 ways that won’t work.” And Michael Jordan said in his Nike ad, “I’ve missed more than 9,000 shots in my career. I’ve lost almost 300 games. Twenty-six times I’ve been trusted to take the game-winning shot… and missed. I’ve failed over and over and over again in my life. And that is why I succeed.”

Let’s hope the vendor, who cannot afford 9,000 missed shots, has learned a lesson.

Errors are likewise common in Nature. In fact, evolution is error-dependent. Our Earth environment ebbs and flows; fluxes and surges; warms and cools; adjusts to episodic and periodic solar activity, meteor and asteroid impact, and who knows what other influences from within this dynamic planet. Dynamism capable of lifting marine limestone to constitute the summit of Mount Everest. Protein, cellular, and other code mistakes lead to adaptation to conditions peculiar to the norm. Organisms evolved of necessity as life altered the environment. For example, from anaerobic to oxygen-rich… as photosynthetic plant life literally took root and prospered.

Life on Earth knows no stasis, and likely never will. Nor will your business, enterprise, and life. As humans, we are blessed with mental, physical, emotional, and spiritual adaptability. We deal effectively with change only when we anticipate it, prepare for it, and react to its advance and onset. Nature, too, has seen to each living organism having a set of tolerances within which it operates. Climate offers a wide band of precipitation, temperatures, and conditions within the normal variation that characterizes any place on our tiny planet. No need for evolutionary adaptations to operate within those wide normal bounds. Reach beyond the normal for extended periods… and evolution kicks in over generations. As enterprise managers, we should know the variations within the normal that influence operations.

Again and again, I urge you to look — know what is normal for your enterprise and life environment. See — anticipate the signs and signals that portend operating environment shifts, surges, and influences. Feel — see deeply enough to anticipate the effects on you and your enterprise. Act — stasis does not exist; react to change that is imminent and certain.

My Fairmount ‘U’ is an annoyance, spurring only our action to secure remedy. The vendor should see it as a signal prompting greater attention to detail. The little things do matter. A chill in the air does not necessarily portend the next continental ice sheet advance, yet it may announce an early frost. We are well-advised to know our operating environment well enough to distinguish ice age from an early October cold front. Chicken Little did not, and he paid the price of embarrassment and ridicule.

I close with a bit different twist. Although little things do matter, sometimes little things are just that… little things. Over-reacting is often painful, always stressful, and frequently expensive. We can handle the season’s first frost simply by closing the windows and lighting a fire. We can (and did) manage a bonus ‘U’ with a simple phone call to a very accommodating vendor.