Life happens, and time marches forward. As I draft this essay, September 9, 2017, I’m reminded of sweeping forces that impact millions of people, and local incidents that change individuals indelibly. Implications surfaced as I visited a nearby 96-acre Tree Farm (established 2004) and spent four fulfilling hours getting to know the owners, chatting in the post-and-beam home they built, and hiking the property.

First the broader context. This morning before departing, during my 30-minute drives to and from the Tree Farm, and then upon returning home, I listened raptly to the news portending the catastrophic impact of an Atlantic-spawned monster named Irma. Eighteen million Americans under a hurricane warning; more than five million within mandatory evacuation zones. Northern outer bands this evening pounding Miami, each band laced with spin-up tornadoes. The Weather Channel meteorologists leaning into the gales of torrential rains, microphone in one hand, clinging to a side-rail with the other, shouting above the wind. And the gusts are still under hurricane force. The beast’s eye-wall winds will eclipse these outer band squalls by nearly 50-60 additional mph – sustained! Nature’s power and fury – humbling and inspiring. Dreadful in its path, yet affording magnificent satellite views of spiraled glory from near-Earth orbit. Some lives will end. Millions of lives will bend… some will break.

We have a good friend who owns a winter home near his son and family in Clearwater, FL. Ron texted an hour ago; his son, accompanied by his wife and kids, escaped to their friends’ place in Louisiana. Ron believes that on the projected track, Irma may erase his and their son’s material residences and business just a block from the Gulf. Life happens… on scales both unfathomable and individual. Who knows what sunrise tomorrow and the day after will reveal. Nothing we can do will alter Irma’s chosen path.

Now back to the individual. I met the Tree Farm couple for the first time today. Lovely pair with Boy Scout sons. Mom sewed a cloth patch onto a Scout shirt as we talked. Her right hand seemed a bit unsteady. She pricked her finger once, painful enough for me to notice her wince. She explained that several years ago while walking with a cousin, a drunk driver plowed into them. The cousin seriously injured (now fully recovered); Mom suffered severe head trauma and lay five weeks in an induced coma, then invested countless hours in rehab to literally start over again. She now seems quite lucid to me; I saw no facial or otherwise evident scars; she joined us for half of our Tree Farm hike, engaging pleasantly and actively. She expressed that her scars are emotional, persistent, and life-altering. The drunk driver was her Irma. Life happens. Mom understands the consequences, and knows that while her accident certainly rises to the level of serious and life-changing, there are worse things that could happen. We agreed that far too many people believe they have problems… problems that are, in actuality, merely nuisances and annoyances.

I drew some observations from my two-hours-plus on the Tree Farm. The ninety-six acres are ruggedly typical of North-Central West Virginia. The creek below their home crosses under the driveway through a three-or-four-foot culvert. During heavy rains, water will rise up and over the drive to a depth sufficient to occasionally imprison them on their homestead. Imprison is temporary and translates to staying home from work or school. From White Day Road and Cherry Run, the land rises more than 300 feet to the 1,800’ hilltops. We covered the property thoroughly via seeded and stabilized haul roads and rehabilitated skid trails. 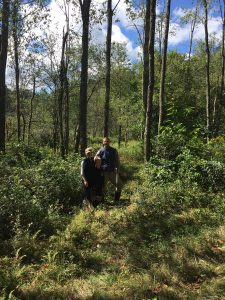 We saw foundation remains of prior domiciles, some of the stones borrowed and used within the new residence designed and constructed by the Tree Farmers. Some of the land use story within this essay I infer from my own observations, informed and enriched by the landowners’ experience and sleuthing.

Numerous old fence rows segment the property, for example partitioning what was then the pasture from the old home and gardens, and from the adjoining forest, most likely a source for fuel wood, fence posts, bean poles, and occasional beams and timbers. Through the early Twentieth Century, the inhabitants were subsistence farmers. The current owners draw primary subsistence via an in-town-derived paycheck. Mom and Dad are educated with advanced college degrees. And, throw in some garden produce, wild mushrooms, chickens and eggs, and some venison.

We walked along a Cherry Run feeder, a sheltered, mostly perennial channel bordered by large oak, poplar, maple, cherry, and occasional sycamore, all enjoying and profiting from the deep colluvium blessing the lower slopes. A deeply rich spot along the feeder run furnished a location for one of the boys to build his forest retreat adjacent to sadly half-dead white oak some four feet in diameter. 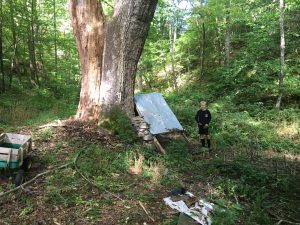 Too steep for pasture, the side slopes have probably supported forest cover since pre-European settlement. Clear-cut most certainly, yet not maintained as tree-free.

The Tree Farmer had performed a TSI (timber stand improvement) treatment 5-8 years ago, prescribed by his State Service Forester. The sales revenue recovered roughly half his 2004 purchase expenditure for the entire property, yet still the forest looks vibrant and fully-stocked. He plans another harvest in 2025, to coincide with the boys entering college. By then, openings created by the first TSI will have closed, creating an opportunity to conduct another commercial TSI. Planned TSI anticipates and directs stand response, generates revenue, and aims ultimately toward regeneration and a new beginning. Revenue alone does not determine the treatments. The Tree Farmer also is meeting his objectives for wildlife, aesthetics, recreation, and even public education.

We discussed the reality that some parts of his land are far more productive than others. Like a beef cattle, only a relatively small portion of the carcass will yield filet mignon. The loin strip of this property is limited to the lower, concave, east- and north-facing slopes. Forget about timber value on the upper, convex south- and west-facing hillsides. Commercial timber production value manifests in a range from the loin through those spartan upper slopes. Wildlife and aesthetic values do not vary directly with timber management factors. To paraphrase ancient wisdom, “to every thing there is a season… and purpose to every place on the land.” I see magic, wonder, beauty, and awe in every layer of Nature’s onion. The large and colorful box turtle we encountered crossing the trail did not appear to notice or mind the chestnut oak and beech stand evidencing poor timber potential.

My sociological and psychological observations are my own, not confirmed by the owners – perhaps I’ll save that discussion with them for another visit. Every forest has a story. As does every life, business, and organization. Many enterprise and life stories are embedded deep in the paragraphs, pages, and chapters composing the tale. The forest tells its story right there on the cover, in plain sight… but only for those who speak the language and can interpret the images and evidence. The human element enriches the Tree Farm tale exponentially.

The prior residents, reaching back well over a century-and-a-half, shaped and molded the forest that now prevails. The shifting land use patterns imposed by the generations of owners still write their indelible signature across those 96 acres. The several-acre reclaimed strip mine also tells a tale of disturbance and recovery, and provides a grassed opening, a type of wildlife cover not otherwise available. 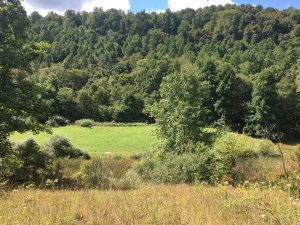 This Tree Farm is also home – not an absentee holding for city folks seeking weekend escape. 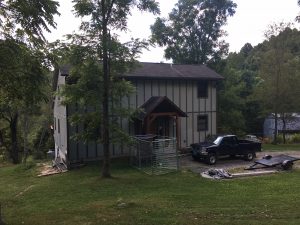 The owners feel blessed to reside on their slice of heaven-on-Earth. In this Forestland Legacy Story, the meanings and merits are especially significant. In their case, land ownership and forest stewardship are therapeutic. Mom feels the elixir as salve for her near-fatal encounter, and lasting emotional trauma – PTSD treated by love for and connection to the land and to Nature. Dad likewise saw his life change with Mom’s accident and its lasting implications. Life has redirected them both, perhaps calmed and tamed them beyond words. The land is now a major focus for them and the boys.

Their dream for the land also compels and propels them. They see a center for education and experience. Trails for hiking and mountain biking. A window to know and experience Nature’s soothing and renewing powers. I encouraged them to learn more about their land, its forests, and the Nature that comprises all facets of their property. As Dad and I trekked deeper into the forest and ascended the trail above 1,800 feet elevation, we paused for a photo of the landowner back-dropped by a stand of cove hardwoods. The human signature is written clearly in the forest; the forest’s signature is indelibly expressed on the owner’s face. 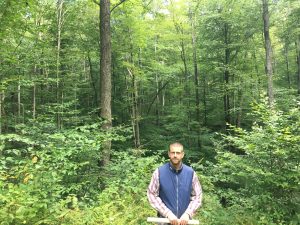 The effect is one integrated, interrelated relationship between Nature and Human Nature. Great Blue Heron, LLC aspires to reconnect all of us to the magic, the wonder, the awe, and the beauty of Nature. We are truly a species that is one with Nature, not separate from it.

Given the life-altering consequence of the horrendous drunk-driver incident, Dad spoke to me of the intentional irony of the Tree Farm’s name: Wolfhaven Tree Farm. Acronym WTF! How else to express the needless suffering and life-trajectory inflection imposed by a selfless act of indulgence, ignorance, and stupidity by some nameless stranger more than a decade ago.

We cannot understand nor explain all that our lives deliver to us, whether a drunken driver or the worst Atlantic Basin hurricane ever experienced. An explanation, no matter how clear or illuminating, would not reduce the pain, save lives, or rebuild families and property. Perhaps all we can do is re-direct our living, learning, serving, and leading in recognition of our relative insignificance to the power, might, and fury of Nature, and accept that life is fleeting and fragile – each and every moment a gift. A gift that carries obligations to our families, and to others who will follow us. Life comes with no guarantees, no assurances that we will see tomorrow’s sun rise. All we can do is accept our humility, know our obligation to serve, appreciate our Earth stewardship responsibility, love those dear to us, and embrace our charge to inspire and educate the next generation and beyond.

Nature-Inspired Learning and Leading – nothing is more important.

Heart of the Team
Scroll to top